"Even If You Kill Us, The Cookie Will Still Be Eaten On The Air" 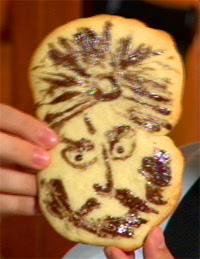 
Well, well - looks like some brave USA Christian TV personalities are taking muslims and Mohammed "head on" by devouring the Prophet, in the form of a sugar biscuit, on the TV show "Flamethrower" --- WHOA!!!!!!! Of course you would NEVER see this happening in the UK and most of the EU countries as the programme would be immediately banned as being "insensitive to muslim feelings". For a list of Things That Offend Muslims go here.

It is interesting to note that the initial reaction to this "blasphemy" by a large United Muslims of America Interfaith Alliance in South San Francisco was to ask people to "ignore the actions". (What no riots in the streets? - maybe the muslims don't think they can get away with such demonstrations in the USA - but once this Mohammed biscuit receives worldwide publicity expect them elsewhere in the world....we'll see) Of course the UMAIA statement was immediately followed with the typical muslim complaint of Islamophobia and whining that muslims are being picked on..........................

Someone please hand me a kleenex AND a Mohammed sugar biscuit. 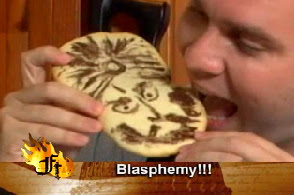 This cookie with a depiction of the Muslim prophet Muhammad will be eaten on 'Flamethrower,' a new political program on Faith TV

A new, cutting-edge, political TV show will challenge Islam with biting humor tomorrow night, placing the face of the prophet Muhammad onto a cookie and then having it eaten on camera.

"We're going to take a stand and say Muhammad's face is delicious," said Molotov Mitchell, the 28-year-old incendiary creator and host of "Flamethrower," a program described as a low-budget, gritty cross between the "The Daily Show," "The Colbert Report," and "The View" if Ann Coulter were the producer. "This is religious and culinary history in the making."

The theme of this week's episode is "All Things Islam," as panelists take on the faith of Muslims in a no-holds-barred fashion.

"Islam is not even a religion," Mitchell told WND from a location somewhere in Eastern North Carolina. "It's an ideology of 'might makes right' disguised as a religion. We're going to show that Allah was with us when we baked this cookie and ate it. Deal with it!"

Mitchell and his fellow panelists – all of whom are Christians in their 20s and whom he calls the next generation of conservatism – are trying to make the point that America is still a free country, and there's no need to cower in fear from Islamo-fascism. He laments the frequency of Islamic suicide bombings, giving a new twist to a famous line from "It's a Wonderful Life," by stating, "Every time a bell rings, a Muhammad gets his wives."

In recent years, European cartoons featuring Muhammad have caused a tidal wave of violent protests and death threats, as Islamic tradition bans depictions of the prophet.

Molotov Mitchell, the Christian creator of 'Flamethrower,' irreverently sinks his teeth into a cookie featuring a depiction of the Muslim prophet Muhammad

"What were doing is exercising our freedom of speech and freedom of the press to the fullest in order to challenge a tyrannical, oppressive system that has doomed the cultures and countries of the Middle East for centuries," Mitchell told WND. "Now it's trying to invade our borders, and somebody has to speak up about it."

In its two previous episodes, "Flamethrower" has taken on subjects including "Is it ethical to kill abortionists?" and "Let's invade Mexico" – not to stay, but just to get rid of the drug cartels

There's also a regular segment titled, "WWMD? (What Would Muhammad Do?)"

"I'm not going to be hurt and insulted. I'm going to ask people to ignore this," said Iftekhar Hai, president of United Muslims of America Interfaith Alliance in South San Francisco. "They would dare not do it to any Jewish person, saying 'the Jews killed Jesus.' The Jewish lobby would slaughter the Christians if they did that."

Mitchell says politics is the driving force of his show, saying, "The [Christian] church really doesn't seem to get it when it comes to politics. The church likes to ask, 'What would Jesus do?' But it often suggests Jesus would hug somebody for every situation, and that's not what Jesus would do. I'd rather ask, 'What would George Washington do?'

A video teaser for the program offers a sample exchange between Mitchell and Fox News host Alan Colmes.

"Muhammad murdered people and he married a 9-year-old. That makes him a murdering pedophile," said Mitchell. "I don't think that we should burn the Quran. I'm a Christian environmentalist. We should put that thing to use. I mean, at least get some toilet paper out of it."

"Your kind of attitude is a really despicable attitude," responded Colmes.

"At first, I was a little scared," she admitted. "But I'm a Christian, and we shouldn't fear to lose our lives. We're in America, and we have a free voice here, and we want it to stay that way."

The hour-long show airs Friday nights on Faith TV on the Sky Angel Network, channel 9708, at 7 p.m. Eastern, and the complete cookie segment is expected to be posted on the video-sharing site YouTube immediately after tomorrow night's airing.
Mitchell says the show has already been recorded on tape, so it would pointless for any would-be assassin to target him.

How about the Mohammed Condom? Photoshop wizards please oblige.

One Mo Condom coming up for Richard Head of Nob End.

Good for Mitchell--we need more of his kind, prepared to make an uncompromising stand for freedom.

What kind of war is this that we have to take a brave stand by eating a cookie?

As Dag said during the cartoon crisis, "The crayon is mightier than the sword."

Mo.Ham.TASTIC! Why didn't I think of this? I am an infidel baker, am I not....okay. I made up a bad joke; What do you call a cinnamon roll with too much roasted garlic in it?

They should sell the cookies at the theatres showing Wilders' movie

A Cinamon Roll with too much roasted garlic in the center?

There is a new “Patriotic Party” forming in the EU, scheduled to be announced on November 15th . http://gatesofvienna.blogspot.com/2008/01/about-patriotic-party.html
At this point, their platform(s) is/are not clear, but there is reason to suspect that they are forming to address the muhammedan immigration crisis among other things.

Why Nov. 15th? Perhaps they would reconsider moving it to a date of historic significance. . .say, Sept. 12th, back in 1683 marked the Siege at the Gates of Vienna, when the muhammedan hoards were utterly humiliated, decimated and repelled . . . for centuries.

Back to topic of Muhammed Cookies. . . Imagine a new Western holiday .. .mimmicking the Jewish holiday of Purim and the tasty little pastry known as Hamantaschen:

The word "Purim" means "lots" and refers to the lottery that Haman used to choose the date for the massacre. a common treat at this time of year is hamentaschen (lit. Haman's pockets). These triangular fruit-filled cookies are supposed to represent Haman's three-cornered hat.

The birth of this "Patriotic Party" could also symbolize their goals with a similar pastry - the muhammed sweet biscuit/cookie (subject of this post). It could become a new and valuable tradition offering annual opportunities to teach our children much need lessons in history.

In retrospect, the juxtaposition between the date of Sept. 12th (Siege at Gates of Vienna)against the mourning of Sept. 11th appears to be divine inspiration.

Interesting thoughts, HRW. Most people would be unable to see a spiritual signifigance in our fight against Muslims, hence, they would be unlikely to create a Purim type holiday of it. However, if they were to go to a Muslim country like the Congo, the Sudan, or Saudi Arabia, and see

THERE ARE FEW CHRISTIANS, AND THOSE THERE ARE ARE BEING KILLED

then, maybe they would understand that our fight does, indeed, have spiritual signigance. In fact, the story that we are living today, may be in the actual Bible in a thousand years from now.

By the way, there are few Christians in those countries, and

THERE ARE NO JEWS AT ALL.

The signigance of that is astounding and yet, we as a corporate body (here in the West) just don't see it.