What A Horrible Thing To Do To A Vagina: New York Times Digs Clitorectomies 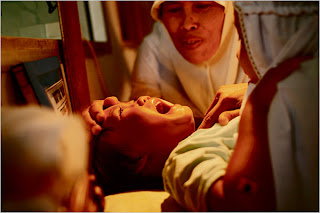 Let us be very clear that, while clitorectomies are sometimes referred to as "female circumcision, what they are talking about is lopping off women's clits. Just so guys will understand, physiologically, that is pretty much the same thing as cutting off the head of your dick.

Atlas has the details:

According to the New York Times puff piece on clitterror:

According to Lukman Hakim, the foundation's chairman of social services,
there are three "benefits" to circumcising girls.

"One, it will stabilize her libido," he said through an interpreter.

"Two, it will make a woman look more beautiful in the eyes of her
husband.

And three, it will balance her psychology." 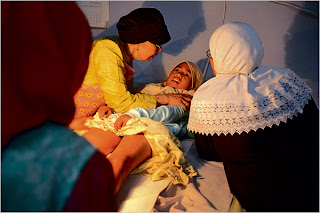 ... the article is essentially a National Geographic-style photo essay
subtitled: “Inside a female circumcision ceremony for young Muslim girls.” The
photos are by Stephanie Sinclair, the brief text is by Sara Corbett.

What is a human rights atrocity with life-long and life-threatening
consequences is here being presented as a “tradition,” often a harmless one,
sometimes not, but always a well-intentioned one.

According to the article, there is “little blood involved”—well, how
bad can that be? And, “antiseptic is used”— well, this is not dangerous at all,
is it? Finally, afterwards, the child is given a “celebratory gift”—what, am I
the kind of westerner who, Grinch-style, would deny the child her gift in order
to make my twisted, “racist” argument? As the article states , the child
clutching (or drinking) her gift “has now joined a quiet majority in Indonesia.”

These photographs were taken in 2006 on a day where 200 girls were
genitally mutilated . In honor of the “prophet Mohammed’s birthday,” the
Assalaam Foundation subsidized both the mutilation—and the “gift.” According to
the Foundation’s chairman of social services, the cutting/mutilation will
“stabilize her libido;” “make a woman look more beautiful in the eyes of her
husband’; and “will balance her psychology.”...

I will let Dr. Bostom, who is a physician and the author of the
forthcoming book, “The Legacy of Islamic AntiSemitism” (a daunting, compelling,
and indispensable book), have the last words. He has written a passionate
article titled “Clitoral Relativism-Female Genital Mutilation in ‘Tolerant”
Islamic Indonesia. ” Quoting from the British Medical Journal on the subject, he
reminds us that:

He notes that FGM is illegal in the United States. He views the above
article as “misleading.”

Go read the whole thing over at Atlas Shrugs.
Posted by Pastorius at 5:52:00 pm

1. Female Circumcision has plenty good sites, which are not listed here.
2. It's not compulsory on woman to do that, if they don't want, the shame only goes to the parents.
3. She is pretty for her husband and the negative effects you listed have no basis, because where are the tests done, how they gathered circumstanced girls to control their vagina for negative effects.

Just presumptions, nothing else, sorry

And for the photos you have taken, please take photos of child's getting their teeth out, if you are truthfully