The liberation of Auschwitz: 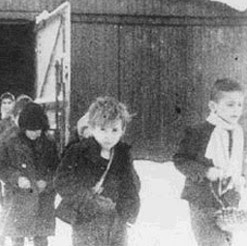 Soon after liberation, surviving children of the Auschwitz camp walk out of the children's barracks. Poland, after January 27, 1945.
From the web site of The United States Holocaust Memorial Museum:

Auschwitz was the largest camp established by the Germans. A complex of camps, Auschwitz included a concentration, extermination, and forced-labor camp. It was located 37 miles west of Krakow (Cracow), near the prewar German-Polish border.

In mid-January 1945, as Soviet forces approached the Auschwitz camp complex, the SS began evacuating Auschwitz and its satellite camps. Nearly 60,000 prisoners were forced to march west from the Auschwitz camp system. Thousands had been killed in the camps in the days before these death marches began. Tens of thousands of prisoners, mostly Jews, were forced to march to the city of Wodzislaw in the western part of Upper Silesia. SS guards shot anyone who fell behind or could not continue. Prisoners also suffered from the cold weather, starvation, and exposure on these marches. More than 15,000 died during the death marches from Auschwitz. On January 27, 1945, the Soviet army entered Auschwitz and liberated more than 7,000 remaining prisoners, who were mostly ill and dying. It is estimated that at minimum 1.3 million people were deported to Auschwitz between 1940 and 1945; of these, at least 1.1 million were murdered.

Much more at the above link.

So, here we are in 2008, repeating the mistakes of the 1930s, via appeasement of Islamofascists:

The 1930s were "a time when a certain cynicism and moral confusion set in among the Western democracies." Men and women who should have known better refused to see what was writ large and plain before their eyes...

Some days, I feel total despair that the world hasn't learned the lesson of the danger of feeding the crocodile.

Addendum from "Auschwitz and Islam" (Hat-tip to Verity Ink of DU d'RAT REVIEW, who emailed me the article). Excerpt:

...Imagine if you had stood on that January morning , seeing Auschwitz, and imagine being told that what you were looking at was ''radical Nazism'', and was not representative of ''true Nazism." What would you have thought?

The truth I wish to state is this: You cannot separate a founder from his movement or a phophet from his prophecy. They are one and the same. Auschwitz was the logical terminus for centuries of latent European anti-Semitism as was 9/11 the logical terminus of fourteen centuries of Islam. Both systems are and were murderous political ideologies that sought to dominate the world through aggressive warfare, to eliminate world Jewry and destroy any and all who would oppose them.

Does this mean that those Germans, who were after all Christians, are lock-step murderers? Putting aside the brave few who spoke out, yes it does. Every German who followed Hitler and the Nazis in all they did, made the Holocaust possible. You couldn't listen today to someone who claims to be a Nazi and hear them say '' Nazism is peaceful'' as you watch violence carried out in the name of Nazism.

Mohammed was Islam's sole founder, it prophet, its voice. He commanded his followers to wage jihad--holy war--to bring all under its control and to kill the Jews wherever they found them. To follow Mohammed is to follow Islam. It isn't enough for ''moderate Muslims'' to denounce the slaughter committed in its name, it is Islam, like Nazism, that is the evil. As there was nothing redeeming in Hitler and Nazism, so is there nothing redeemable in Islam or Mohammed. The words and deeds of these two men--Adolph Hitler and Mohammed--have murderously and profoundly impacted humanity in such horrendous ways and should serve as a warning to the world of the danger of those who consider themselves ''prophets'' and to those who would become its adherents.

Nazism is gone and Islam is still with us, still threatening and still killing. As long as those who continue to follow Mohammed's teachings commit violence in its name while their fellow Muslims say little or nothing to condemn it, Auschwitz's legacy will always be us and so will 9/11!

Saint Loup, AKA Marc Augier, Waffen SS and spiritual father of the Front National said in "Toison d'Or"
that he was very familiar with Nazi Germany, having traveled all over it, that there was NO OPPOSITION by the German people, everybody was a nazi
and the very few that did not approve
where simply killed, a good thing
in his opinion.

And there lay the future of Eurabia.

This dhimmi concept was for periods where Islam was mostly asleep.

When radicalism reigned, all the Jews and Christians, or just
moderate muslims where all killed, like in nazi Germany.

When the Muslim trigger the new
St Barthelemy, there will be no non muslim survivors, they are disarming their victims already
and have been stocking arms for the last thirty years, beginning
with the rich French "porteurs de valises", hauling Semtex in their
Rolls Royces and Cadillacs to the European suburbs for the Grand Green Night to come.

Epaminondas,
Why the criticism of what you call Biblical reasoning? While I am not terribly religious, I am perpetually disgusted by practitioners of Judaism claiming that Christianity drove the Holocaust, or in some way denigrating it. This is highly visible in the comments section of Little Green Footballs, but much less so here for the most part.

But yet, when it comes down to a secular position of retaining one's nationality (which Israelis themselves loudly express), it's "Biblical reasoning" to blame.

Jews in Europe tolerated CENTURIES of anti-Semitism before Hitler rose to power. Read much Shakespeare or visit the centuries-old Jewish ghettos in Europe? Is it that hard to believe that at first this was viewed as just more of the same that Jews themselves had tolerated since before the U.S. was even founded?

Just wondering what is fueling this vitriolic attack on people who are probably most rabidly pro-Israel of any on Earth.

Epaminondas is a troll who turns up various places. There's a reason why you don't see him on our blog - we don't waste time arguing with trolls. Their output goes straight to the spam bucket and is flushed forthwith and without a second thought.

Trolls do not argue in good faith. It has been said that arguing with a troll is like playing Beethoven to an omelet. I don't even want to know what is wrong with people who spend their time that way. Idle minds are the devil's workshop, evidently.