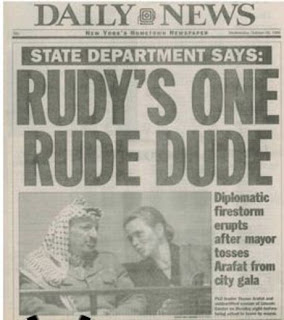 I'm saddened by the fact that Giuliani is not doing well in the Caucuses. Many people say Romney understands the terrorist threat. That does seem to be the case. But, there's a difference between understanding a problem, and being willing to do something about it. Giuliani has proven, time and again, that he is willing to take the heat that comes with being a doer, not a talker.

Check this out, from Atlas Shrugs:

On October 23, 1995, Mayor Giuliani hosted a private concert for the United Nations' 50th anniversary. All of the world's leaders were invited except two: Fidel Castro and Yasser Arafat. Unlike Castro, Arafat decided to attend anyways and was swiftly asked to leave by Mayor Giuliani.
The uproar was deafening and a State Department spokesman - Nicholas Burns - scolded, "We don't think this is right. (Arafat) is the leader of the Palestinian people, and he is negotiating peace with Israel. He should be given the respect and dignity and hospitality in the United States that the leader of the Palestinian people deserves."
To which Rudy replied, "I would not invite Arafat to anything, anywhere, anytime, anyplace ... I would rather not have someone who has been implicated in the murders of Americans there."

This is why I trust Giuliani above all the other candidates on this issue. His understanding is gut level, he naturally recoils from these people and is fearless in standing up to them. I would never have to wonder for a moment him hesitating or rationalizing in the face of the Islamist threat.

Mitt Romney seems more like a consensus builder and a compromiser. Those are important attributes in a leader, but I'm not too sure that is the kind of leader we need now.