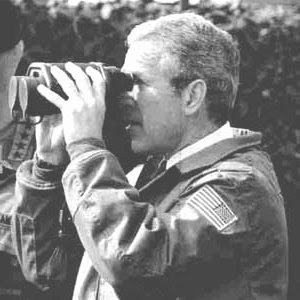 I have pretty much given up on writing positively about George Bush, or about the strong stand he might take against our enemies.

The NIE Report was extremely disheartening, but that is not what caused me to give up on the President. Here's the thing; George Bush is the leader of the United States, the most powerful country in the world. Iran is, in the eyes of many, the most dangerous nation on Earth, in the sense that they are a nation run by religious fanatics who will soon have at their disposal, nuclear weapons. And, faced with such a potential abomination, what was George Bush's response? Look back. Since the election cycle of 2004, George Bush has been saying the same thing:

All options are on the table.

At first, my ears heard that as a threat. And, it seemed to me that threats were what was needed. However, a threat repeated over and over, without action, is an empty threat.

And so, I came to the conclusion that George Bush's mantra of "all options are on the table" was, instead, an expression of his confusion over what to do. As in,

"What are you going to do about your drinking problem, George?"

"All options are on the table."

Let's face it, when one has had the same problem for a very long time and one's response for years on end is, "All options are on the table," then it is clear that

NO OPTIONS ARE TRULY BEING CONSIDERED.

That being said, and with the hope that I am wrong, here is Norman Podhoretz' latest column:


When I first predicted a year or so ago that Bush would bomb Iran’s nuclear facilities once he had played out the futile diplomatic string, the obstacles that stood in his way were great but they did not strike me as insurmountable. Now, thanks in large part to the new NIE, they have grown so formidable that I can only stick by my prediction with what the NIE itself would describe as “low-to-moderate confidence.” For Bush is right about the resemblance between 2008 and 1938. In 1938, as Winston Churchill later said, Hitler could still have been stopped at a relatively low price and many millions of lives could have been saved if England and France had not deceived themselves about the realities of their situation. Mutatis mutandis, it is the same in 2008, when Iran can still be stopped from getting the bomb and even more millions of lives can be saved—but only provided that we summon up the courage to see what is staring us in the face and then act on what we see.

Unless we do, the forces that are blindly working to ensure that Iran will get the bomb are likely to prevail even against the clear-sighted determination of George W. Bush, just as the forces of appeasement did against Churchill in 1938. In which case, we had all better pray that there will be enough time for the next President to discharge the responsibility that Bush will have been forced to pass on, and that this successor will also have the clarity and the courage to discharge it. If not—God help us all—the stage will have been set for the outbreak of a nuclear war that will become as inescapable then as it is avoidable now.

It's not even the NIE it's the morphing of the dedication to safeguard the american people by expanding the CHANCE others have for freedom into same old same old. And for what?
Abbas and the Al Saud pleasure and appeasment?
Oil?
The belief that the arabs will tamp down radical islam if we shaft our friends?
It's not even comprehensible