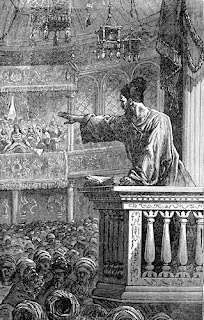 Verboten Discussion?—Hitler, Muhammad, and Islam
Andrew Bostom
Cliff May deserves credit for his National Review Online column of Thursday (1/24/08) which dares to associate—however indirectly, and in the end, I am afraid, inadequately—those he terms, using layers of prophylactic rhetorical separation from orthodox Islam, either “militant jihadists,” or “Islamists,” and their movement as “militant Islamism,”—with Hitler, and his “movement,” i.e., Nazism.
May’s inchoate effort, should be applauded for its attempted illustration of any possible ideological nexus between Hitler’s Nazism, and Islam. But ultimately, the associations he makes—the “ability to nurse grievances and stoke ambitions,” Germans/Aryans as a master race, and the concordant supremacism of “militant Islamism,” and generic “fanaticism”—ignore much more intimate, if uncomfortable to acknowledge, doctrinal and historical connections between ancient Islam, and modern Nazism, which I have elaborated, below.
Islam, Nazism, and Totalitarianism
During an interview conducted in the late 1930s (published in 1939), Karl Jung, the Swiss psychiatrist and founder of analytical psychiatry, was asked “…had he any views on what was likely to be the next step in religious development?” Jung replied, in reference to the Nazi fervor that had gripped Germany,
We do not know whether Hitler is going to found a new Islam. He is already on the way; he is like Muhammad. The emotion in Germany is Islamic; warlike and Islamic. They are all drunk with wild god. That can be the historic future.
Albert Speer, who was Hitler’s Minister of Armaments and War Production, wrote a contrite memoir of his World War II experiences while serving a 20-year prison sentence imposed by the Nuremberg tribunal. Speer’s narrative includes this discussion which captures Hitler’s racist views of Arabs on the one hand, and his effusive praise for Islam on the other:
Hitler had been much impressed by a scrap of history he had learned from a delegation of distinguished Arabs. When the Mohammedans attempted to penetrate beyond France into Central Europe during the eighth century, his visitors had told him, they had been driven back at the Battle of Tours. Had the Arabs won this battle, the world would be Mohammedan today. For theirs was a religion that believed in spreading the faith by the sword and subjugating all nations to that faith. Such a creed was perfectly suited to the Germanic temperament. [emphasis added] Hitler said that the conquering Arabs, because of their racial inferiority, would in the long run have been unable to contend with the harsher climate and conditions of the country. They could not have kept down the more vigorous natives, so that ultimately not Arabs but Islamized Germans could have stood at the head of this Mohammedan Empire. [emphasis added] Hitler usually concluded this historical speculation by remarking,
“You see, it’s been our misfortune to have the wrong religion. Why didn’t we have the religion of the Japanese, who regard sacrifice for the Fatherland as the highest good? The Mohammedan religion too would have been much more compatible to us than Christianity. Why did it have to be Christianity with its meekness and flabbiness?”
A similar ambivalence characterized Nazi Germany’s support for Arab Muslim causes in the World War II era. Hitler for example, in December 1937, even proposed omitting his “racial ladder” theory—which denigrated the Arabs—from a forthcoming Arabic translation of Mein Kampf. And a Berlin Foreign Ministry spokesman, during a November, 1942 press conference reported in the New York Times, took “great pains” to assure Arabs that Nazi antisemitic policies were directed at Jews, exclusively. The spokesman elaborated:
The difference between Germany’s attitude toward Jews and Arabs has been clearly shown in the exchange of letters between the former Prime Minister of Iraq, Rashid Ali, and the German Institute for Racial Problems. We have never said the Arabs were inferior as a race. On the contrary, we have always pointed out the glorious historic past of the Arab people.
Although now, inexplicably, almost ignored in their entirety, writings produced for 100 years between the mid-19th through mid-20th centuries, by important scholars and intellectuals, in addition to Carl Jung—for example, the historians Jacob Burckhardt and Waldemar Gurian, philosopher Bertrand Russell, Protestant theologian Karl Barth, sociologist Jules Monnerot, and most notably, the renowned 20th century scholar of Islamic Law, G.H. Bousquet—referred to Islam as a despotic, or in 20th century parlance, totalitarian ideology.

Being imbued with fanaticism was the ultimate source of Muhammad’s great strength, and lead to his triumph as a despot, according to the 19th century Swiss historian Burckhardt:
Muhammad is personally very fanatical; that is his basic strength. His fanaticism is that of a radical simplifier and to that extent is quite genuine. It is of the toughest variety, namely doctrinaire passion, and his victory is one of the greatest victories of fanaticism and triviality. All idolatry, everything mythical, everything free in religion, all the multifarious ramifications of the hitherto existing faith, transport him into a real rage, and he hits upon a moment when large strata of his nation were highly receptive to an extreme simplification of the religious.
The Arabs, Burckhardt emphasizes, Muhammad’s henchmen, were not barbarians and had their own ingenuities, and spiritual traditions. Muhammad’s successful preaching among them capitalized upon an apparent longing for supra-tribal unification, “an extreme simplification.” Muhammad’s genius, “lies in divining this.” Utilizing portions of the most varied existing traditions, and taking advantage of the fact that “the peoples who were now attacked may also have been somewhat tired of their existing theology and mythology,” Muhammad
…with the aid of at least ten people, looks over the faiths of the Jews, Christians, and Parsis [Zoroastrians], and steals from them any scraps that he can use, shaping these elements according to his imagination. Thus everyone found in Muhammad’s sermons some echo of his accustomed faith. The very extraordinary thing is that with all this Muhammad achieved not merely lifetime success, the homage of Arabia, but founded a world religion that is viable to this day and has a tremendously high opinion of itself.
Burckhardt concludes that despite this achievement, Muhammad was not a great man, although he accepts the understandable inclination,
…to deduce great causes from great effects, thus, from Muhammad’s achievement, greatness of the originator. At the very least, one wants to concede in Muhammad’s case that he was no fraud, was serious about things, etc. However, it is possible to be in error sometime with this deduction regarding greatness and to mistake mere might for greatness. In this instance it is rather the low qualities of human nature that have received a powerful presentation. Islam is a triumph of triviality, and the great majority of mankind is trivial…But triviality likes to be tyrannical and is fond of imposing its yoke upon nobler spirits. Islam wanted to deprive distinguished old nations of their myths, the Persians of their Book of Kings, and for 1200 years it has actually prohibited sculpture and painting to tremendously large populations.
University of Notre Dame historian Waldemar Gurian, a refugee, who witnessed first hand the Communist and Fascist totalitarian movements in Europe, concluded (circa 1945) that Hitler, in a manner analogous to the 7th century precedent of Muhammad, had been the simplifier of German nationalism.
A fanatical simplifier who appeared as the unifier of various German traditions in the service of simple national aims and who was seen by many differing German groups—even by some people outside Germany—as the fulfiller of their wishes and sharer of their beliefs, with some distortions and exaggerations—such, as long as he had success, was Adolf Hitler.
Based upon the same clear understandings, and devoid of our era’s dulling, politically correct constraints, Karl Barth, like Carl Jung (cited earlier), offered this warning, also published in 1939:
[Karl Barth] Participation in this life, according to it the only worthy and blessed life, is what National Socialism, as a political experiment, promises to those who will of their own accord share in this experiment. And now it becomes understandable why, at the point where it meets with resistance, it can only crush and kill—with the might and right which belongs to Divinity! Islam of old as we know proceeded in this way. It is impossible to understand National Socialism unless we see it in fact as a new Islam [emphasis in original], its myth as a new Allah, and Hitler as this new Allah’s Prophet.

And after interviewing Muslim Brotherhood founder Hassan al-Banna himself, who “preached the doctrine of the Koran in one hand and the sword in the other,” Carlson observed:
It became clear to me why the average Egyptian worshipped the use of force. Terror was synonymous with power! This was one reason why most Egyptians, regardless of class or calling had admired Nazi Germany. It helped explain the sensational growth of the Ikhwan el Muslimin [Muslim Brotherhood]
In a brilliant, dispassionate contemporary analysis, Ibn Warraq describes 14 characteristics of “Ur Fascism” as enumerated by Umberto Eco, analyzing their potential relationship to the major determinants of Islamic governance and aspirations, through the present. He adduces salient examples which reflect the key attributes discussed by Eco: the unique institution of jihad war; the establishment of a Caliphate under “Allah’s vicegerent on earth,” the Caliph—ruled by Islamic Law, i.e., Shari’a, a rigid system of subservience and sacralized discrimination against non-Muslims and Muslim women, devoid of basic freedoms of conscience, and expression. Warraq’s assessment confirms what G.H. Bousquet concluded (in 1950) from his career studying the historical development and implementation of Islamic Law:
Islam first came before the world as a doubly totalitarian system. It claimed to impose itself on the whole world and it claimed also, by the divinely appointed Muhammadan law, by the principles of fiqh [jurisprudence], to regulate down to the smallest details the whole life of the Islamic community and of every individual believer… the study of Muhammadan Law (dry and forbidding though it may appear)… is of great importance to the world of today.
Islam Über Alles?—The Convergence of Jihad, Islamic Jew-Hatred, and Nazism
Dr. Bostom has much more here.
Posted by Pastorius at 6:33:00 pm

As Dr. Bostom continues to unfold the direct links between islam and the nazi era - it's all the more reason to insist that each and every one of the hundreds of photographic images of ancient korans taken by Nazi scholars must be released for general consumption on the web.

Maybe we ought to come up with a graphic and put it in the sidebars of blogs.

Do you have any suggestions?

Pastorius,
I added a few labels to your posting. We need to be able to access this information easily, without scrolling and scrolling.