....a ride in the presidential motorcade to get frozen custard from The Dairy Godmother on Saturday afternoon.  Twelve dark vehicles wound thru small side streets to the Del Ray section of Alexandria, Virginia, a suburb of Washington.

Liz Davis, owner of the frozen custard shop, said she had about 4 minutes of “lag time” between knowing she would have “a visitor” and the President walking in with his daughters.

Although the flavor of the day was posted as butter pecan, the President ordered a small cup of vanilla frozen custard with hot fudge and toasted almonds. (ABC News) 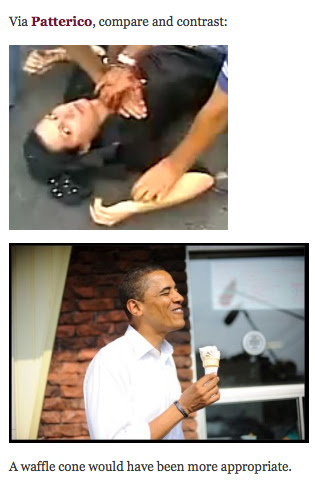 Obama didn’t have to make a photo op out of his trip to the ice cream store. But he did, and it represents a political tone deafness that opens him up to ridicule.

They were being slaughtered while Barack ate ice cream. It will be hard for them to avoid remembering that image.

Next time Barack wants to take his kids out for ice cream while young people are dying while trying to unseat our common enemy, perhaps he shouldn’t turn it into a photo op.