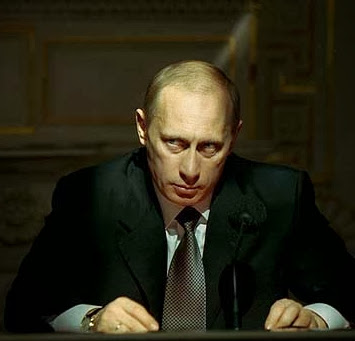 
Vladimir Putin has vowed to pursue terrorists to their “total annihilation”, in his first public comments since the Volgograd suicide bombings.

In his traditional New Year's Eve address, which was broadcast at midnight from the Far Eastern city of Khabarovsk, (5pm in Moscow), he praised Russia’s unity in the face of both terrorism and natural disasters and promised to continue an unrelenting fight against the bombers.

“In the past year we have faced problems and serious challenges including the inhuman terror attacks in Volgograd and unprecedented disasters in the Far East,” he said.

“Dear friends, we bow our heads in memory of the victims of these terrible attacks. We will strongly and decisively continue the battle against terrorists until their total annihilation,” he said.

I can't help but think the Jihadists have bitten off WAY more than they can chew.
Posted by Pastorius at 9:46:00 pm

Christine, did you get to your destination?

I don´t like or trust Putin, but he will not hesitate in dealing with terrorists. His hands are not tied up with PC stupidity,

Like Charles Martel, i dont trust or like this piece of shit! But at this point he is the only "leader" whos willing and able to stand up to terrorist animals.

I also agree with Pasto, when the terrorists threatened Russia, my first thought was "theyre digging their own graves".

In that respect, i think 2013 will be known as the year when muslim terrorists screwed themselves over...i mean look at muslim brotherhood in egypt...look at al qaeda in syria, they were counting on obama's support.

And now these idiots in russia...

Which reminds me, happy new year everyone!!!!