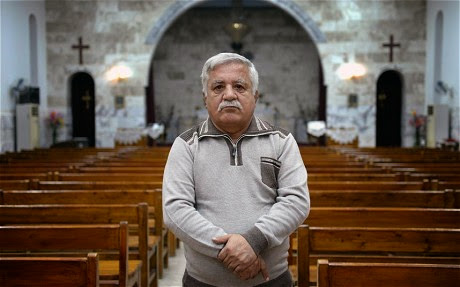 
As the last remaining Christian priest in the Baghdad suburb of Doura, Archdeacon Temathius Esha no longer just puts his trust in God's all-seeing eye. Built into the wall of his vestry, amid pictures of Catholic saints, is a 16-screen CCTV monitor, keeping watch on every corner of his church in case of possible attack. Along with the armed guard outside and concrete anti-blast walls, it makes St Shmoni's feel more like a fortress than a house of worship.

And after a decade in which Doura's Iraqi Christian community has been robbed, kidnapped and murdered by Islamist extremists, it finds itself offering sanctuary to an ever-dwindling flock. "Doura was once one of the biggest Christian communities in Iraq, with 30,000 families," said Mr Esha, as he prepared for an afternoon congregation that barely filled two of the 22 rows of pews.

"Now there are only 2,000 left. They feel they are strangers in their own land, and that makes them want to leave. The bleeding from migration is continuous."

Today, St Shmoni is one of just two of Doura's original seven churches still open, casualties of a period in which the area become one of the most notorious al-Qaeda strongholds in Baghdad.

In the years that followed the US-led invasion of 2003, two churches were car bombed, while the others closed due to lack of numbers and the kidnapping for ransom of four of Mr Esha's fellow priests, which has left just him and a local monk remaining.

Over the years, his own church has had an improvised explosive device and two car bombs planted outside it. All were fortunately discovered before they were detonated. The picture in Doura is repeated across Iraq, and indeed the wider Middle East, where the onset of the Arab Spring has ended the protected status that the region's secular strongmen gave to religious minorities.

In Iraq, a Christian community that numbered more than a million in Saddam Hussein's time is now thought to have shrunk to as few as 200,000. Those unable to join Iraqi diasporas in Europe and America often fled to sister communities in neighbouring Syria, only to find themselves in similar peril thanks to al-Qaeda's presence in the war against President Bashar al-Assad.

In post-Mubarak Egypt, the Christians fear a similar reckoning, and only last month Pope Francis warned that the entire Church was in peril across the region, adding: "We will not resign ourselves to imagining a Middle East without Christians." Yet with al-Qaeda once again on the rise in Iraq - more than 6,000 people have been killed in 2013, the most in five years - Christian communities such as Doura are already contemplating that very scenario.

Now, though, a last-ditch effort to end the exodus is under way, courtesy of the diminutive form of Louis Sako, appointed as the new Patriarch of Baghdad earlier this year. Before moving to the Iraqi capital he had served in the northern city of Kirkuk, where he had mediated in many kidnapping cases. At first glance, the 64-year-old cleric is living proof of the Christian adage "blessed are the meek".

He speaks with a soft voice, and, at only 5ft 5in, is dwarfed by the armed bodyguards who these days accompany him at all times. But in his first public address in March, delivered at St Joseph's church in central Baghdad, he broke with the Church's long-standing convention that speaking out about the problems would only make them worse.

Instead, he gave his congregation a blunt but powerful message, rich in historical resonance. Iraq was their country as much as anyone's and if they left a 2,000-year-old culture would die for ever. "I know your fears," he said. "But you have been here for 2,000 years and are at the origin of this country, together with the Muslims. Why is the little flock still afraid? Do not emigrate, whatever the pressures."

Earlier this month, the Patriarch returned to St Joseph's to ordain six new deacons for Baghdad, the first since the 2003 invasion. As a packed congregation sang a song entitled Peace for Iraq, the white-robed figures knelt before Mr Sako as he cut a lock of hair from each of them into a silver bowl, a traditional symbol of devotion. The real symbolism of the ceremony, though, was to show that in recruiting new blood to its senior ranks, the Church was digging in for the long term.

The Christian flock that Mr Sako has dedicated himself to saving is mainly Chaldean, an Eastern-rite Catholic faith that is independent of Rome but recognises the Pope's authority. For most of their time in Iraq, they and other Christian sects have co-existed peacefully with their Muslim neighbours. In Saddam's time they specialised as medics, teachers and academics – professions that earned them the trust and respect of the Muslim people.

As such, the invasion of 2003 – portrayed by some as a "Crusade" by fellow Christians – led to little in the way of direct reprisals. However, in the lawless years that followed, their prosperity made them targets for kidnappers and criminals, who sometimes felt less guilty preying on non-Muslims. Almost uniquely in Iraq, Christians have no tribal structure, depriving them of the blood ties under which other Iraqis bind together in times of trouble.

As such, they have never formed self-defence militias, despite the fact that post-war Iraq offers little reward to those who turn the other cheek. "Christianity in the Middle East has always encouraged its people to rely on the protection of the law, not the tribe," said Mr Sako in an interview with The Sunday Telegraph. "Right now, the law here in Iraq is very weak." As al-Qaeda's presence in Iraq has grown, Christians have been targeted deliberately, with sporadic bombings of churches and killings of priests.

In 2010, al-Qaeda gunmen attacked an evening Mass at Our Lady of Salvation Church in Baghdad, taking more than 100 hostages. By the time the security forces stormed the building two hours later, 58 were dead. The atrocity was condemned by senior Muslim clerics, but saw yet another huge spike in Christians leaving Iraq.

"A gunman poked his AK47 through the door and started shooting," said Bassam George, 24, who survived the attack by hiding along with others in the church's sacristy. "I spent the time just thinking, 'How can I face the God?' For a year afterwards, I had nightmares, and would drink a bottle of whisky every night just to sleep." Mr George has no plans to leave Iraq.

He points out that all Iraqis have suffered religious violence: while about 1,000 Christians have died since 2003, at least 30,000 Muslims died in the sectarian civil war of 2006-07 alone. None the less, the minority status of Christians has left them feeling acutely vulnerable – nowhere more so than in Doura, which sits on a palm-lined stretch of the Tigris as it winds south of Baghdad.

Christians first settled here in the 1960s to work at the nearby oil refinery, with a cluster of churches, monasteries and seminaries giving the area the nickname "The Vatican of Iraq". But during Saddam's reign, Doura also became populated with Salafists – Sunni hardliners put there to defend the city's southern flank in the event of an uprising in Iraq's Shia-dominated south. Post-war, the Salafists declared the area to be a mini al-Qaeda caliphate, threatening Christian women for not wearing headscarves and extorting tithes for non-existent "protection" services. "In Saddam's time, Christians could worship freely, and as long as you avoided politics you could survive," said Mr Esha.

"But since the war we have been attacked, robbed, raped and forced out of both Doura and the country. "Often just psychological pressure has been enough; people will drive past here and fire guns in the air, or leave bullets and threatening messages outside Christian homes. Sometimes Islamic extremism is used as an excuse, sometimes it's just blackmail for criminal purposes."

For most of the past five years, the situation seemed to be on the mend. In 2008, after the US troop "surge" that drove most al-Qaeda fighters out of Baghdad, hundreds of Christian families who had fled Doura began coming back. At St John's Church – shut for months that year because of al-Qaeda threats – Muslims and Christians sang songs together that Christmas. Now, violence is on the rise again.

Only two weeks ago, eight corpses were dumped in Doura. The bodies are as yet unidentified, but the fact that they were blindfolded suggests that the sectarian death squads who took Iraq into its darkest days five years ago are back at work. With that in mind, many of those gathered at Mr Esha's church last week would make this Christmas their last in Iraq if they could.

"I will leave whenever I can," said Isaac Napoleon, who has lost a brother and a son to terrorism. "Christians are finished here in Iraq."

It's nice to know what all those american lives, and casualties were for

With this news and the news about the confirmation of Saudi involvement in 9/11, and the Obama's involvement with our enemies, Iran, Syria, etc.

I am tempted to say there has never been a time in American history that the American government has worked against it's people than right now.

However, there is ONE time. That time is when the American government conspired to enslave black people.

But of course, as terrible as that was, it was only part of the population.

Now the government is working against ALL the people.

We are all the government's slaves now.

Wonder what the Iraqi Christians think of "Democracy" and "Freedom" now.

Saddam Hussein had to go. But another dictator should have been installed in his place.

This REALLY is Bush's fault. And Obama's policies have made it worse.