QUICK.. Someone get me a violin

AFL-CIO’s Richard Trumka getting ‘grief’ from members over Obamacare

AFL-CIO President Richard Trumka said he was “getting grief” from union members regarding his support for the Affordable Care Act, akaObamacare. The calls have not changed his opposition to repeal, he added, saying the program merely needs to be “tweaked.” 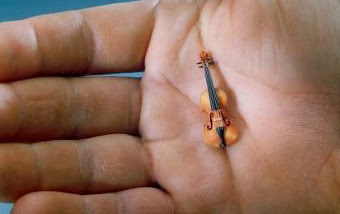 Trumka made the comments in response to a question from Politico reporter Mike Allen during a breakfast event hosted by the news website. Allen wanted to know if Trumka, who has been an enthusiastic backer of the law since it passed, was getting angry responses from rank-and-file members.President Obama's new law has been causing serious problems for union-run multiemployer health insurance plans, known as Taft-Hartley plans."Am I getting grief about that? Sure, I am getting grief about that. Do I want to see Obamacare scrapped? Absolutely not, because it is a good start," Trumka said. When is Trumka going to die? I mean, I hope it's soon.