Support For Terrorism In Muslim Countries 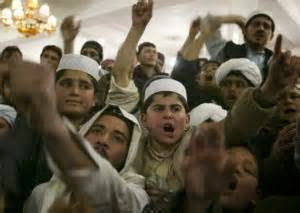 According to a new Pew poll:


... Islamist terrorist groups still command double-digit support, with Hamas being looked upon favorably by about one-third of respondents. About one-fourth do not have an opinion of the terrorists, leaving them up for grabs in the ideological war.

The country with the worst trend is Turkey. It is the only country where support for suicide bombings has increased....

Watch for Obama to kiss up to Erdogan even more.
Posted by Always On Watch at 12:05:00 pm