Palestinians Cheer Local ‘Hitler’: “We Are All Hitler! We Are With You Even to Death!” 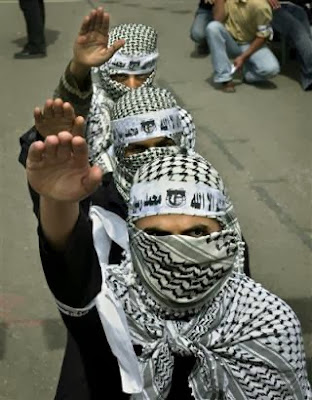 Of course they did.
The people above are their elected leaders.

Jamal Abu Al-Rub, known in his hometown as ‘Hitler,’ is a leader of the Al Aqsa Martyrs Brigades. He doesn’t look that much like Adolf Hitler but he does have a mustache – and he wants to annihilate the Jews. (Frontpage)

Palestinian terrorist leader and politician Jamal Abu Al-Rub, or ‘Hitler,’ is gaining support in the West Back for his radical policies. The local Hitler will represent his district in the Fatah government.
Frontpage reported:


A terrorist known in his hometown as “Hitler” – both for his physical resemblance to the German dictator and for his policies – has swept local primaries and will represent his district for the ruling Fatah party in upcoming Palestinian legislative elections, according to Palestinian sources.

Jamal Abu Al-Rub, a leader of the Al Aqsa Martyrs Brigades, won the Fatah primaries in the northern Samarian village of Qabatya, just outside Jenin, election officials say. He was one of dozens of terrorists and militant leaders to dominate the local elections.
The Al Aqsa Martyrs Brigades, founded in 2000, is a terrorist group responsible for dozens of deadly suicide bombings and hundreds of shooting attacks against Israeli civilians.

…Abu al Rub has since won the admiration of many Palestinians for daring to assault one of the most powerful figures in Fatah.

“Oh Hitler, you have brought pride to the homeland and Allah,” wrote on of Abu al Rub’s fans on Facebook.

Another fan wrote: “We are all Hitler. We are with you even to death!”

Islamists are indeed with Hitler, in ideology and violence.

Thanks, Stogie. You too. May God bless you and your family this Christmas and on throughout 2014.