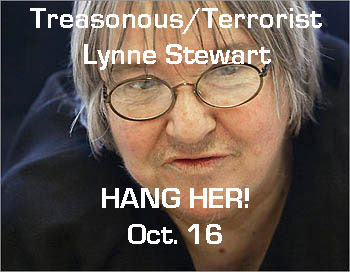 NEW YORK (CBSNewYork/AP) — The U.S. government has asked a New York judge to release a dying former civil rights lawyer who was convicted in a terrorism case from prison.

The government made the request on behalf of Lynne Stewart in a letter to U.S. District Judge John Koeltl on Tuesday. Koeltl has said he cannot release her early without a recommendation for “compassionate release” from prison authorities.

Prosecutors said in their letter that the director of the Federal Bureau of Prisons was making the request along with prosecutors. The 74-year-old Stewart is not scheduled for release until August 2018.

Prosecutors say she suffers from recurrent stage-four breast cancer. Stewart has been imprisoned since 2009 after she was convicted of helping a blind Egyptian sheik, Omar Abdel-Rahman, communicate with his followers from prison.

The administration is desperate to release the blind sheik. Releasing this other piece of scum is a stratagem, the first step to achieve the freedom of the other piece of scum who is also sick, and the "compassionate release" from prison request will be expedited after the Lynne scum is released.

Do you think the Obama admin would ever try to get the release
of a traitorous lawyer who represented a "right-wing" terrorist? If you could even find
such a thing.

Too late. She's been released. Gone home for a shave and haircut so that she can once again look the respectable lawyer.

So get this.. the cleric who enabled the Holocaust, signing a concordat with Hitler- who reached out to him before he did the same even to the Italian fascists who he so admired- that cleric was Pope Pius XII. He never went to prison, never decided it wise to protest against the Holocaust- and refused to excommunicate Hitler even after Hitler killed himself. He did excommunicate Joseph Goebbels though- not because of his role in the Holocaust though, but because he decided to take a Protestant wife! The funny thing that the immensity of the evils that Nazis had accomplished paled in comparison to those they had planned. Not just the eradication of every single person still alive that was related to Jesus- but the slaughter of all humans- everywhere, except for the so-called Aryans and a few designated "slave races". Pius was worried about the rights of Catholic priests during the holocaust more than anything else. When he realized how unpopular that would make him- given the fact that "his guy" lost the war- he claimed he had saved thousands of Jewish lives, hiding them away from the Nazis. The Jews at the time were quite fearful of Christians, and some supported his claims. That is quite smart for both groups. The Catholics can rest easy and maintain their sense of moral self-worth, and the Jews can rest easier knowing that Catholics and Protestants would be on friendlier terms with them in the future. And who knows? Maybe he did save a few thousand Jewish lives despite some evidence to the contrary. Focusing on that would be largely missing the point.

The point is that Nazi Germany was 97.5% Christian and Cathlic- while Italy was only 97.1% "pure" in that regard. That is a pretty inconvenient fact for the guys who think that the Nazis were more socialist / atheist than they were nationalist Christians. The 1939 census data that that I just mentioned was hardly a surprise to anyone- previous years had similar results. What I find shocking is that modern Protestants and Catholics in America refuse to accept history. German and Italian Believers, on the other hand, have taken it upon themselves to learn from their predecessors mistakes.

Italy and Germany were once the two hearts of the Holy Roman Empire, whose recurring blood libel and ethnic cleansing campaigns were the model that Hitler based the Holocaust on. Don't just take my word for it though. Search Religion_in_Nazi_Germany on wikipedia.

Is Lynne Stewart a monster? No- in my opinion, she was merely flawed. Not even Hitler was a monster. When we use that word, it is to distance ourselves from his way of thinking. Sadly, we are all capable of falling into the same trap.. for similar reasons, too. As Mawrty Rubin said,

“Why is there racism, anti-semitism, bigotry, homophobia, xenophobia? Because people are cowards and won't take responsibility for their own lives.”