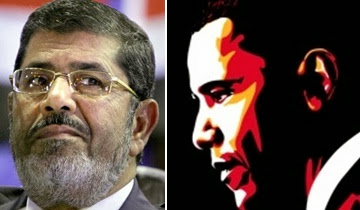 The first telephone recording between Mohamed Morsi and Muhammad Al-Zawahiri was from the presidential institution and lasted for approximately 59 seconds. In that conversation Morsi congratulated Al-Zawahiri on his release from jail and assured him that he won’t be followed or observed by any Egyptian Authorities.
In another call, lasting approximately  ”2 minutes ,56 seconds”, Morsi told Muhammad Al-Zawahiri about the Muslim Brotherhood’s support for Al-Mojahidin (Islamist fighters), a ultra radical Islamic terrorist organization and explained the necessity that Islamist fighters support the Brotherhood  in order to succeed in ruling Egypt.
A third call was recorded a month and a half  later and  discussed  a plan between the presidency institution and the Muslim Brotherhood from one side and Al-Qaeda on the other side, to create terrorists cells inside the country  to protect the Ikhwani regime.

Al-Zawahiri also told Morsi that he must stop building churches, and the Copts must pay “Jizia”—Fees—if they want to live in peace. Al-Zawahiri also said: you should apply the experience of Pakistan and Afghanistan in Egypt, and must execute the secularists!  Morsi replied: We have taken deterrent decisions against secularists and we will put new laws that limit their media, and we have a big budget to set up new TV channels that urge jihad and al-Qaeda ideology.

In October 2013 Albawaba News claimed to be in possession of such recordings where ousted president Morsi committed to al-Qaeda’s leader and made several promises which included avoiding the arrest of Jihadists and personal permission to open training camps for Jihad in the Sinai.
According to unspecified sources such conversations could soon become public, with dramatic consequences for Mohamed Morsi who is currently awaiting trial in a maximum security prison near Alexandria.

What I want to see are transcripts of the conversations between Obama and Morsi. I remember having read that when Morsi was elected, they had a somewhat long conversation. I´ll try to look for the link.