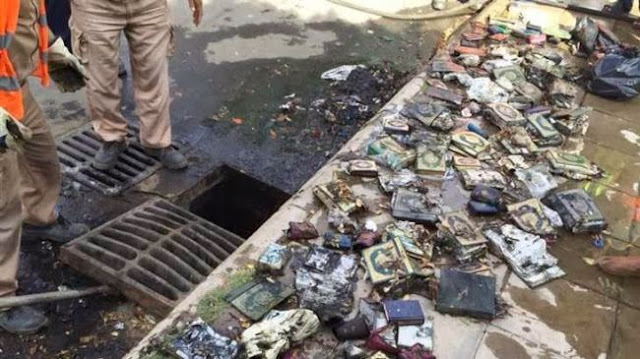 State organizations in Saudi Arabia have desecrated the Muslim holy book by discarding over fifty copies of the Qur’an in Taif city’s street sewerage canals.

According to a Saudi official in the Commission for the Promotion of Virtue and Prevention of Vice, the incident was reported by a local student, who saw the holy books on his way home in Al-Salama district of Taif.

The service company that specializes in opening drainage inlets was then called, and dozens of copies of the Quran were retrieved.

A photo that shows desecrated books has now gone viral on the internet and social media websites.

This is not the first time the Holy Quran has been desecrated in Saudi Arabia. Earlier this year, the move by prison officials in Al-Haer province to insult the Holy Book led to protests in different parts of the Kingdom.

The desecration of the holy Quran in a country, which is the birthplace of Islam, has raised eyebrows in the Muslim world.
Posted by Pastorius at 1:39:00 pm

Even Saudis know that the Quran is shit.

In the 700's the Saudis gathered ALL the Quranss, as in ALL, and made damn sure there was only one edition after that (for obvious reasons), DIDN'T THEY?

The catholic church attempted something similar, I beleive after Nicaea as well,

Epa, what are you referring to? I don't know about that history.