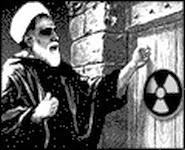 Iran's 'FINAL DEAL':  Disabling Instead of Dismantling?HT: Nukes of Hazard.

Last week, in an interview with CNN's Fareed Zakaria in Davos, Switzerland, Iranian President Hassan Rouhani stated that Iran will not destroy any of its approximately 19,000 centrifuges, roughly 10,000 of which are currently being used to enrich uranium.

Critics of the ongoing diplomatic process unsurprisingly jumped on Rouhani's remarks as evidence that Iran is negotiating in bad faith and will never take the steps necessary to ensure that its program cannot be used to make bombs - despite the fact that it wasn't entirely clear from the discussion whether Zakaria was referring to the first step deal agreed to last November (which clearly doesn't require the destruction of any centrifuges) or a final agreement, which has yet to be negotiated,

Even supporters of the first step agreement expressed grave concern about Rouhani's apparent ultimatum. Bloomberg’s Jeffrey Goldberg called it a “bad sign” and Zakaria himself warned of a coming diplomatic “train wreck”.

Everyone needs to calm down.

The November 2013 first step agreement between the P5+1 and Iran verifiably caps Iran's nuclear program and rolls back its most proliferation sensitive aspect: the stockpiling and production of uranium enriched to 20%. In return, Iran will receive approximately $7 billion in sanctions relief (assuming of course that it lives up to its obligations under the deal).

However, neither side intends this to be the end state of the diplomatic process. The P5+1 rightly seeks much greater constraints on Iran's program (including but not confined to limits on the number of centrifuges) and Tehran seeks much greater relief from sanctions. Constructing a deal that meets the requirements of both sides is the subject of the next round of talks, which are slated to get underway in February.

Citing a recent report by the Institute for Science and International Security (ISIS), a respected authority on the technical aspects of Iran's nuclear program, Goldberg argues that Iran would have to dismantle 15,000 centrifuges as part of any acceptable final deal, since merely mothballing them and leaving them in Iran would allow the regime to quickly start spinning them again.

But this is a gross misreading of what the ISIS report proposes regarding centrifuges. In fact, ISIS more or less recommends the mothballing approach Goldberg says is a non-starter.

The report states that as part of a final deal that keeps Iran 6-12 months away from a breakout capacity, Iran will need to cap the number of centrifuges at roughly 4000 (down from the current 19,000) and that excess centrifuges must be turned off, disabled in a manner so as to require at least one month to restart their operation, and then stored in locations separate from the operating centrifuges under strict IAEA supervision.


The stored centrifuges would only be unsealed to replace or provide spare parts to repair broken centrifuges from among those still spinning.

Under this scenario, then, Iran may not be forced to technically dismantle any centrifuges, depending on how one defines “dismantle”. There are undeniably other ways to limit Iran's domestic centrifuge capacity without requiring that Iran physically put its centrifuges to the band saw.

At this point it’s not at all clear what Rouhani meant by dismantlement or what end state he and the Supreme Leader would or would not accept. Indeed, it would be surprising if Rouhani publicly revealed exactly what he would be willing to countenance as part of a final deal, given that talks have scarcely gotten off the ground. A long and difficult negotiation, which will encompass far more than the issue of centrifuges, is ahead of us and we shouldn’t rush to judgment based on limited information.

It's also important to remember that there are many critics of diplomacy back in Iran and Rouhani is certainly mindful of this fact. He is seeking to paint his efforts in the toughest light possible to his domestic audience, which is divided about the merits of limiting Iran’s nuclear program.

This also in large part explains Iran's strong reactions to U.S. characterizations of certain aspects of the first step deal as "dismantlement." But what matters at the end of the day is the text of the agreement, which identifies clear steps that each side must take. The same will be the case regarding whatever final deal is reached. The rest is just political theater.

This is not to downplay the potential costs of domestic posturing. The more Rouhani says that Iran will not accept any dismantlement of Iran’s nuclear program, the harder it could be for him to accept and sell back home the significant roll back that will undoubtedly be demanded.

Likewise, the more Obama administration officials say that Iran must dismantle large parts of its nuclear infrastructure, the more difficult it could be to find creative solutions that verifiably keep Iran from the bomb and to convince Congress to move on the significant sanctions relief that will be required to secure Iranian concessions.

But Rouhani’s dismantlement comment shouldn’t be grounds for excessive hyperventilation. A good final deal can be achieved without physically destroying centrifuges.

President Obama has stated that he believes the odds of reaching a final deal with Iran on its nuclear program are no better than 50-50. There is no doubt that the next round of talks will be enormously challenging and that significant gaps between the two sides will need to be closed. But these talks are the best chance we have to ensure that Iran’s nuclear program can’t be used to develop bombs. We should give our negotiators the space and flexibility they need to explore what might be possible.
Posted by Pastorius at 7:22:00 pm