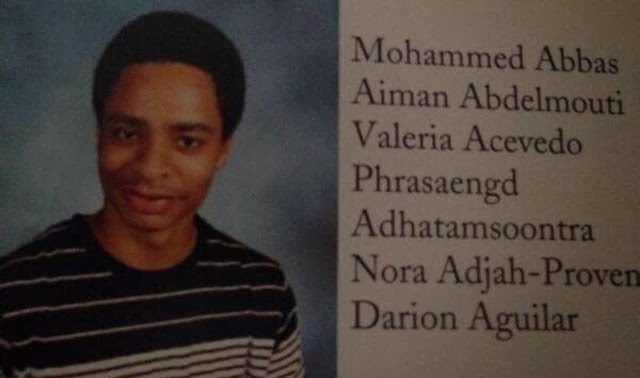 Mohammed Abbas was a terrorist and founder of the Palestinian Liberation Front.

However, let us be clear, the Mohammed Abbas mentioned here may be a different person. He could be a friend of Aguilar's.

Aiman Abdelmouti appears to be a local to Silver Spring Maryland, a student at a University in that area.

I don't konw who those other people are.
Posted by Pastorius at 7:55:00 pm

richlramsey at 3:31 PM January 26, 2014
I noticed at liberal news sites like Huff Post they're not including a picture Aguilar. They hate it when yet another one of their pet minorties kills more white people. Just imagine if the races were reversed. You would immediately see a picture and all the MSM news stories would be blabbering on about White racism 24/7 for weeks on end.

Baltimore Sun provides another image of the shooter:

"
The recent graduate of James Hubert Blake High School in Montgomery County lived in well-maintained white clapboard house in College Park, but neighbors said they didn't know him or his family.

But Noah Sturdivant did.

As people posted messages on social media speculating on Aguilar's possible motives or character, Sturdivant took to Twitter to defend his former classmate.

"Darion was one of the nicest kids at my school," said Sturdivant, a Blake High School senior who was a year younger than Aguilar. "He never had a problem with anyone. I never saw him mad or anything. I just feel like people are making him out to be something that he's not.". ."
Khalib Genovez said he sat next to Aguilar in class last year at Blake. "He was just chill. He just wanted to do his work, not really into the drama. Not the type of the person who wants to argue with the teacher or make any drama."


Remarkable is the fact that several people will admit to knowing 'of' him, but none can actually say they were his friend long enough to 'actually know' him.

there are 3 possibilities
1) HE is a terrorist ..takes longest to decide and must be based on known connections proven thru the guy's personal effects
2) Boyfriend shit ..seems more and more unlikely, but who knows right now
3) Another dipshit nut job

Once again, 2 and 3 require OBJECTIVE screening of some sort. Not the kind where we ask you questions and someone interprets your answers, the kind where your red blood cells are counted, or you see a +/- on the stick you pee on. THAT is the kind of research $ which are required to BEGIN to peel back this issue.

The rest is noise, people

Tyler Johnson, one victim of the shooting, spoke at Wilde Lake last year about drug addiction. Anyone remember that? via twitter

Baltimore Sun. Tyler Johnson had been clean for more than two years, he wrote on his Facebook page.

The 25-year-old Mount Airy man made a point of seeking out other struggling addicts, was active in local 12-step programs and spoke to high school students and young adults about living a sober life, friends said.