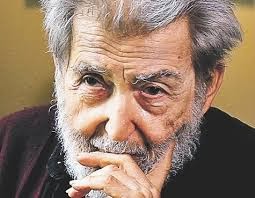 And usually when a Liberal calls for the impeachment of a Liberal American President it is because the Liberal has supposedly been too violent towards our enemies. Like, for instance, Noam Chomsky has accused Obama of "War Crimes" for his use of drones.

IMO, this is the first reasonable, and yet extreme, criticism I have heard of Obama from a noted Liberal.

And, of course, I think he is right.

May the hole in the dam lead to more cracks and gradually the collapse of the dam itself.


Hentoff sees the biggest problem as Obama’s penchant to rule by executive order when he can’t convince Congress to do things his way.

The issue jumped back into the headlines last week when, just before his first Cabinet meeting of 2014, Obama said, “I’ve got a pen and I’ve got a phone … and I can use that pen to sign executive orders and take executive actions.”

“Apparently he doesn’t give one damn about the separation of powers,” Hentoff told WND.

“Never before in our history has a president done these things.” And just to make sure everyone knew how extremely serious he regarded the situation, the journalist added, “This is the worst state, I think, the country has ever been in.”

Many have regarded Hentoff as the conscience of civil libertarianism and liberalism for decades. Recognized as one of the foremost authorities on the Bill of Rights and the Supreme Court, Hentoff was a columnist and staff writer with The Village Voice for 51 years, from 1957 until 2008, when his columns began appearing in WND.

Hentoff left the Voice after he looked into the abortion industry, was shocked by what he found and had a falling-out with colleagues.

“Within a few months after he was elected, I wrote a column saying he was going to be the most destructive, dangerous president we’ve ever had,” he said.

Hentoff said people he’d known for years told him to stop being so negative and to give Obama a chance.

“Well, we’ve given him a chance. I understated the case a little.”

Seems the left is beginning to face the possibility of losing big in the next election cycle and fearing the precedent this administration will turn against them with equal if not more ferocious force...given their rhetoric about the fascist tea party - their imaginations must be giving them sleepless nights.