"CHANGE" - For the First Time, Working Age Americans are the Majority of People on Food Stamps 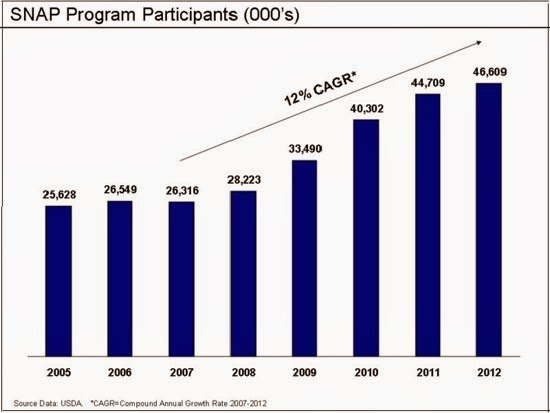 "CHANGE" - For the First Time, Working Age Americans are the Majority of People on Food Stamps.(Liberty Blitzkreig).By Michael Krieger.


When people ask me to describe the state of the U.S. economy, what I always say is that it can best characterized as an ongoing state-sanctioned theft.

This theft consists of the 0.01% oligarch class intentionally leveraging a corrupt monetary and political system in order to funnel all of the wealth of the non-oligarch rich and middle-class upward to them.

The underclasses are kept quiet and in-line via food stamps and other forms of so-called “welfare.”

In reality, I have frequently maintained that food stamps are actually corporate welfare and that the stock market represents food stamps for the 1%. The entire economy is a gigantic bait and switch in which a handful of people rape and pillage everyone else.

With unemployment and GDP statistics hopelessly manipulated, we must look at other data points in order to gain an understanding of how things really stand. Data related to food stamp rolls is one way to gain real insight into the true state of the U.S. economy.
In an excellent article from the Associate Press, we learn several things.