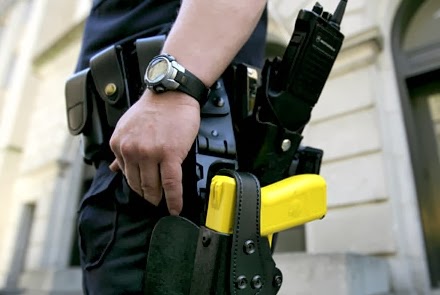 Taze Those Who Insult Abdulfattah

From Your Black News:


A black man has filed a federal lawsuit claiming his gen!tals were tasered “until he could smell flesh burning” after his father was fined for dropping a cigarette on the ground. Courthouse News Service reports that 26 year old Daniel Johnson claims he was at†acked by two deputies after his 58 year old father was fined for littering in front of their home.

Johnson says he was brutalized by officers after he inquired about why his father was subject to such a high fine and community service. He also says he told officers that his father had dropped the cigarette because he has nerve damage in his hand.

“Deputy Abdulfattah responded by belligerently threatening Mr. Johnson, telling him that ‘I can write you a ticket too if you want,’”alleges the lawsuit. The lawsuit continues:

“At this point, plaintiff’s mother, who had also come outside to see what was going on, told him to go back into the house. He was not being given a ticket, and neither of the officers said anything further to him, so Mr. Johnson turned away and began to walk back toward the house.

As he walked away from the officers, Deputy Russell grabbed plaintiff from behind and tried to slam him against the police car. When Mr. Johnson asked why he was assaulting him, Deputy Russell maintained his hold on plaintiff and then tried to slam him against a nearby concrete post. Mr. Johnson’s mother and father repeatedly asked the officers to ‘leave him alone’ because ‘he hasn’t done anything wrong.’ The officers refused.”

Another officer named “Nelson” then allegedly put Johnson in a half Nelson and threw him to the ground. That’s when Deputly Abdulfattah allegedly came up and began tasering Mr. Johnson.

“Mr. Johnson could smell his flesh burning from the Tases and he was screaming in pain,” alleges the lawsuit. Mr. Johnson was then arrested for battery but insists that he did nothing wrong. Johnson is seeking damages for the false arrest and excessive force used on the night of the incident.

At Vlad Tepes, we learn the incident initially began over a dropped cigarette:


Daniel Johnson, 26, claims the unjustified attack took place on Dec. 6, 2012 at around 9 p.m. after sheriff’s deputies “Abdulfattah” and “Russell” cited his 58-year-old father for littering in front of their home.

Johnson claims the cops brutalized him after he asked why his father faced such a steep fine and eight hours of community service, and pointing out that his father had dropped the cigarette because he has nerve damage in one hand.

Johnson, who is 5 foot 7 and weighs 155 lbs., says he did not threaten, resist or raise his voice to the officers.