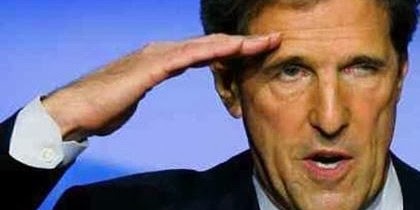 
The chief commander of Iran’s Revolutionary Guards warned the United States yesterday that if it attacked the Islamic Republic’s nuclear facilities, it would blow back in America’s face. Maj. Gen. Mohammad Ali Jafari was responding to a statement by Secretary of State John Kerry made on Thursday to Al Arabiya that if Iran does not abide by the interim Geneva agreement with the 5+1 world powers reached in Geneva, “the military option of the United States is ready and prepared to do what it would have to do.”

“Mr. Kerry!” Jafari replied. “Know that a direct conflict with America is the strongest dream of the faithful and revolutionary men around the world. Your threats to revolutionary Islam are the best opportunity.

Muslim leaders for years have been preparing us for a decisive battle. I think it’s unlikely that your wise men would allow America to be placed on one side of this decisive battle and take the ridiculous military option from the table into action.”

Claiming that America’s days of superiority are over because of budget deficits and broken policies, Jafari warned Kerry of a massive retaliation from its proxies if Iran is attacked.

Perfect.
How long until these idiots BELIEVE their own words and ideas (if they care)?

How long until our leaders understand their words and policies encourage these mistakes?

The Iranians are who they are, the Guardian Council IS Iran as far as the outer world is concerned. But we ELECTED the morons who are helping the GC to widen and accelerate their path.

We will BE LUCKY if Netanyahu takes care of this for us.

"I am Haman Kerry; and I am reporting for duty."

Reporting for duty to Lord Allah.