An interfaith group which works to combat political and religious extremism in the UK has raised awkward questions about the way anti-Semites "use" holocaust memorials to "sanitize" their own images, even as they actively engage in anti-Jewish bigotry.

Yet Stand for Peace today released clear evidence of Farooq's own rabid anti-Semitic views, including open glorification of Nazism and Adolf Hitler, and questions whether London officials who approved his participation in the ceremony ascribe any value to Holocaust Memorial Day at all.

As part of its investigation, Stand for Peace has published a slew of offensive tweets made by Farooq. They include the following:

"The hour will not come until the Muslims kill the Jews.”

"Gassing is my hobby”

Glorifying Nazism on Twitter Screenshot - Stand for Peace.
Support for terrorism
Apart from anti-Semitic tweets, Farooq has also expressed his extremist views on Facebook, including a passionate defense of the infamous Woolwich terrorists who murdered off-duty British soldier Lee Rigby.

In another message on Twitter, he defended extremist preacher Anjem Choudary, who was recently implicated as being a key player behind an Islamist network actively recruiting young British Muslims to fight in Syria. 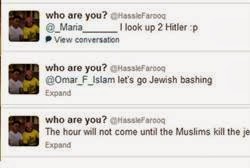 One way of "remembering the Holocaust" Screenshot - Stand for Peace

According to Stand for Peace, Hassan Farooq is a “senior member” of the Newham Dawah Team, an East London-based Islamic missionary organization which attempts to spread the message of Islam.
In 2009 the group released a video featuring calls in Arabic for a "war against the Jews"

Newham Dawah Team is part of the Islamic Education and Research Academy (iERA) Network, and its officials regularly liaise with iERA officials such as Abdurraheem Green. The iERA is an extremist Salafi group, some of whose officials have been banned from the UK. In the past - despite his apparent work with various "interfaith" initiatives - Abdurraheem Green has been quoted as talking of a Jewish “stench” and advocates the killing of homosexuals.

Sam Westrop, Director of Stand for Peace, questioned how "such a solemn and important duty can be entrusted to a vile extremist who does not even try to hide his hatred for Jews, women and homosexuals?" and suggested that the apparently puzzling contradiction in Farooq's action is actually nothing new.

"Once again, anti-Semitic activists are attempting to exploit the commemoration of the Holocaust to sanitize their public image," he explained,but added that "the facade is a thin one."

Westrop questioned the commitment of the event's organizers, given that Farooq apparently made little effort to hide his anti-Semitism.

"The public officials who chose this extremist clearly do not believe the Holocaust Day Memorial has any real value, or they would have made the minimal effort to ensure suitable speakers were found."
Posted by Pastorius at 9:26:00 pm