Why Muslims Cannot Adopt - A sordid Story of Sex 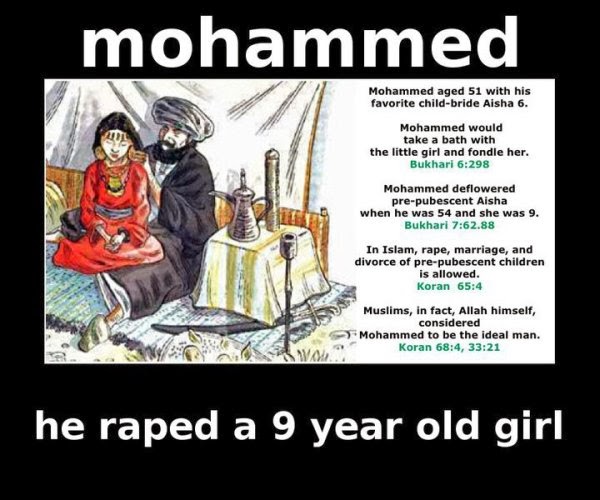 Adoption under Islamic law is different than commonly practiced in other cultures. The term that Muslims use for their version of adoption is called kafala, meaning "to feed," which is more descriptive of a foster parent than an adoptive parent.

"The term that Muslims use for their version of adoption is called kafala, meaning "to feed," which is more descriptive of a foster parent than an adoptive parent. "

Kafala means "to sponsor". Its exactly like someone being someone else's "guardian". It doesn't just mean "to feed".

But yes, Mohammed seems to have seen his adopted son's wife's cleavage and then couldn't control himself. Allah of course was ever ready to please Mohammed so a new verse made it forbidden for Muslims to adopt children.

To be clear. Kafala means "to sponsor" literally. If you're a guardian of someone, you're called a "kafeel" which translates to "sponsor". Meh, small matter but just couldn't help myself, LOL.

Planck's got it wrong, apparently

nico: kafala means to sponsor someone when that someone is a migrant worker.

But in regard to children kafala has a different legal definition translating into what we would call "care and feeding."

If you go to work in the Gulf states you require a kafala, a sponsor, obviously this has nothing to do with adoption.

The Islamic form of "adoption" is called kafala, which literally means sponsorship, but comes from the root word meaning "to feed." - See more at: http://www.islamicity.com/articles/Articles.asp?ref=MF0408-2432#sthash.tYzswKcV.dpuf

Pastorius, thanks for linking, it's appreciated.

Thanks for letting me know what happens in the Gulf states, I never knew...

Anyway, the article that you linked to was quoting Algerian law with regards to what kafala is. Algeria isn't the universal Arabic authority so when they pass laws regarding what the legal meaning of words should be, it doesn't apply to other countries, or to Arabic altogether.

As for the "root word". This is Arabic we are talking about. Root words can have completely different meaning to the words that are derived from them. One of the most famous words in that regard is Islam which comes from the root word "SLM". This root word, when the proper alephs and diacritical marks are added, means peace. But Islam does not, and has never, in any context literally meant peace. It has always meant "submission" or "to submit". There are contexts that you can metaphorically take Islam to mean peace, but that's another discussion for another time.

Anyway, similarly, kafala literally (just like the article even said) means "sponsorship". And with respect to children, it would still mean sponsorship, literally. The Algerian law can then define it as they please. The Western equivalent remains "Guardian", if I understand the Western system right.

Secondly, the kafala system of the gulf state stems from slavery where the royal family or well off families were "kafeels" of slaves. In that they had full legal control over them. Similarly, children who are "adopted" are under the protection or rather control of these kafeels.

This isn't too hard to see seeing that Zaid, the adopted son whose wife, Zainab, Mohammed wanted to steal so changed the laws, was a slave owned by Mohammed. He freed him later, if I remember correctly and adopted him as his son. All Islam did was remove that process of adoption and go back to the concept of slavery. That is still what the Islamic concept of adoption is.

You own the child. And don't forget that Islam does not recognize independence after you're an adult.

Anyway, being long winded here, but I was just pointing out that "kafala" in fact does not mean "to feed". That is the meaning of the root word (which I would love to know what it is), and not of the derived word.

It's really too bad you are not doing the preponderance of the writing here, Nico. You are a far better writer than I, and a far more analytical thinker.

Oh well, I'm the guy who has the time.

BTW years ago I also came across words in Arabic for "stinging of snakes" and "leather tanning"...they were both derived from the root word SLM...

Although I agree that the "peace" of the Islamic variety is more like a snake biting the shit out of you, it still goes to show that root words and their meanings have got basically nothing to do with what the derived word is supposed to be.

Arabic isn't one of the most difficult languages to learn for no reason.

To me, it makes absolute sense that the "peace of Islam" is like the stinging of a snake.

To me, it makes absolute sense that the "peace of Islam" is like the stinging of a snake.

It's really too bad you are not doing the preponderance of the writing here, Nico. You are a far better writer than I, and a far more analytical thinker.

Well :D most of what I write is reaction to other posts. It is much faster to do than to come up with a whole article, if you know what I mean. You are free to post my comments wherever you want.

Hopefully when I have more time, I'd actually want to get back to writing on the blog :D