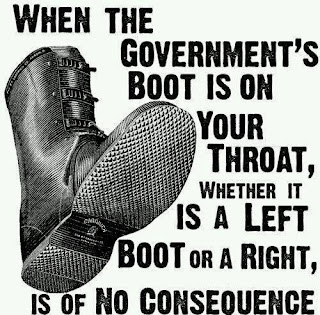 On the grounds of suspicion, no crime required.


For almost 40 years, Carole Hinders has dished out Mexican specialties at her modest cash-only restaurant. For just as long, she deposited the earnings at a small bank branch a block away — until last year, when two tax agents knocked on her door and informed her that they had seized her checking account, almost $33,000.

The Internal Revenue Service agents did not accuse Ms. Hinders of money laundering or cheating on her taxes — in fact, she has not been charged with any crime. Instead, the money was seized solely because she had deposited less than $10,000 at a time, which they viewed as an attempt to avoid triggering a required government report....

I almost always make deposits of less than $10,000. Furthermore, because of the nature of my small business, I make frequent deposits (mostly checks). I'm probably safe on this one. So far.

Still our government keeps stepping outside the bounds of our Constitution.

How long are WE THE PEOPLE going to submit to creeping tyranny?
Posted by Always On Watch at 1:39:00 pm

I WOULD ENJOY PACKING

“Now I will tell you the answer to my question. It is this. The Party seeks power entirely for its own sake. We are not interested in the good of others; we are interested solely in power, pure power. What pure power means you will understand presently. We are different from the oligarchies of the past in that we know what we are doing. All the others, even those who resembled ourselves, were cowards and hypocrites. The German Nazis and the Russian Communists came very close to us in their methods, but they never had the courage to recognize their own motives. They pretended, perhaps they even believed, that they had seized power unwillingly and for a limited time, and that just around the corner there lay a paradise where human beings would be free and equal. We are not like that. We know what no one ever seizes power with the intention of relinquishing it. Power is not a means; it is an end. One does not establish a dictatorship in order to safeguard a revolution; one makes the revolution in order to establish the dictatorship. The object of persecution is persecution. The object of torture is torture. The object of power is power. Now you begin to understand me.”

Epa,
if there was somewhere else to go ...

I WOULD ENJOY PACKING

I don't know this "changed" America. It's not the country I lived in just a few years ago.

This has happened a number of times. There is a (war-on-drugs-era) law that banks must report cash transactions of $10,000 or greater to the IRS. A business that routinely makes cash deposits of near, but not more, than $10,000 draws scrutiny because IRS ASSUMES they are doing so to avoid the reporting threshold. That this is going on in the USA is infuriating.

NOW GET THIS: It is extremely difficult to get the money back. because:
In a perversion of law the burden of proof is on the IRS in criminal prosecutions only.
In tax enforcement the burden of proof is on the citizen.
So it behooves the IRS to avoid making a criminal charge; it's easier for them to keep the money because the victim has to prove his case to get his money back.

Anonymous,
You can thank GHW Bush and the GOP for $10,000 reporting law.

Read the blog post again. She wasn't making deposits at or above the $10,000 threshold.

You are absolutely correct that when the IRS seizes, it's well nigh to get any of it back.

our NZ friends a re feeling it too-http://falfn.com/CrusaderRabbit/?p=23353