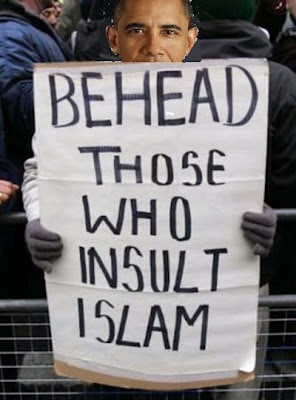 The more scary prospect is that Obama does understand Islam, but he chooses to obscure the facts because he actually prefers Islam to the American way of life as it has been.

That's what I believe.

But for now, let's go with what Graham has to say.


Graham noted Obama’s recent comments on the conflict in the Middle East, when the president called for a global effort against terrorism.

“In his speech, the president made this baffling comment about Islam: ‘Islam teaches peace. Muslims all over the world aspire to live with dignity and a sense of justice. And when it comes to America and Islam, there is no us and them – there is only us, because millions of Muslim Americans are part of the fabric of our country,’”

Graham wrote in a recent commentary for Decision magazine. But he said that just doesn’t line up with the facts that people see. Obama, he said doesn’t understand Islam.

“Even President Bush in the previous administration called Islam a peaceful religion. Both men have done a great disservice to the American public by not understanding Islam and its teaching in the Quran,” Graham wrote.

He noted he recently was in Lafayette Square, across the street from the White House, to pray for Pastor Saeed Abedini, an Iranian-American jailed already for two years in Iran, “simply because of his Christian faith.”

“Islamic terrorists are indiscriminately and brutally killing all who stand in their way, as evidenced by the gruesome, demonic images of recent beheadings of American and British journalists. For Muslims, peace comes only through submission to Islam. When they speak of peace, they mean submission to their religion,” he said.

“This is why, as we prayed for the release of Saeed and persecuted Christians, I spoke to the president via the media and loudspeakers,” he said.

His message was simple: “Mr. President – followers of a peaceful religion do not cut off the heads of innocent people in barbaric fashion…

Mr. President – believers in a peaceful religion do not kidnap 300 young schoolgirls as Boko Haram did in northeastern Nigeria in April and reportedly [sell] them to men to be sex slaves …

Mr. President – men who practice a peaceful religion do not detonate bombs on an American street during a marathon race to kill and maim innocent people …

Mr. President – no one who belongs to a peaceful religion would even consider hijacking airlines and flying them into buildings occupied by thousands of innocent people beginning their workday …

Mr. President – no peaceful religion would tolerate, let alone practice, female circumcision, require a women to have her husband’s permission to leave her home and take up employment, and restrict her ability to receive justice…”

“Mr. President – a peaceful religion would not condone and allow a father to drown a daughter in a swimming pool in front of the family in the name of family honor because she might have stayed out late in the evening with her boyfriend.”

And pointedly, he noted,

“Mr. President – why haven’t the 3.5 million Muslims in North American rejected this gross, barbaric and despicable behavior by their fellow Muslims on American soil?”

In his commentary, headlined “Is Islam Really a Religion of Peace?” in the November Decision edition, he cited Obama’s claim al-Qaida and Boko Haram are guided by an ideology that will “simply wilt and die if it is consistently exposed, confronted and refuted in the light of day.” No, he wrote.

“That simply is not the case. Islam … is a false religion [that is] guided and characterized by treacherous deceit.”

After all, isn't he "the smartest President evah"?