From Salon (dated October 25, 2014) comes this stunner about the nature of Islam:


...[W]hat of all those ISIS warriors unschooled in French semiotic analysis who take their holy book’s admonition to do violence literally? As they rampage and behead their way through Syria and Iraq, ISIS fighters know they have the Koran on their side – a book they believe to be inerrant and immutable, the final Word of God, and not at all “malleable.” Their holy book backs up jihad, suicide attacks (“martyrdom”), beheadings, even taking captive women as sex slaves. This is not surprising; after all, the prophet Muhammad was a warrior who spread Islam by the sword in a dark, turbulent time in history. (Christianity’s propagation had, in contrast, much to do with the Roman emperor Constantine’s fourth-century conversion and subsequent decriminalization of the faith.)

Moreover, the razor-happy butchers of little girls’ clitorises and labia majora, the righteous wife-beaters, the stoners of adulterers, the shariah clerics denying women’s petitions for divorce from abusive husbands and awarding sons twice the inheritance allowed for daughters, all act with sanction from Islamic holy writ. It matters not a whit to the bloodied and battered victims of such savagery which lines from the Hadith or what verses from the Koran ordain the violence and injustice perpetrated against them, but one thing they do know: texts and belief in them have real-life consequences. And we should never forget that ISIS henchmen and executioners explicitly cite their faith in Islam as their motive....

Read the entire essay HERE. Worth your time.

Yes, the tone of the essay is anti-religion. Any religion. But that Salon has actually published the ugly truth about Islam represents a paradigm shift.

And, yes, the Canadian Parliament gunman was obeying the literal word of Allah.  Waiting for those hordes of "moderate Muslims" to make themselves known in a meaningful and very public way.

Meanwhile, the following, based upon the Koran, continues (Click directly on the image to enlarge it): 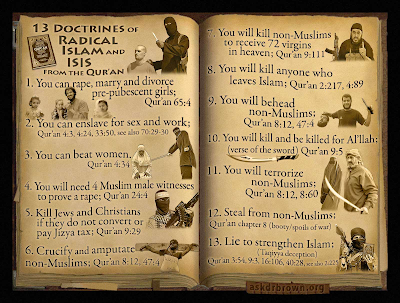 Sorry AoW...tried your link and got the error message ERROR 404

Didn't last long, did it?

I have repaired the link.

Thanks for letting me know.