Obama, John Holdren, and the Logic of Importing Ebola Patients For Treatment in the U.S. - Let's Think About This For A Second 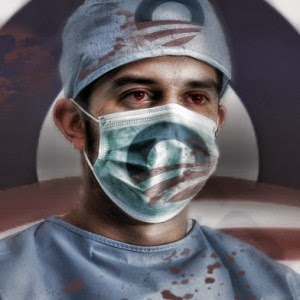 
The “purpose” of the memo states: “Come to an agreed State Department position on the extent to which non-U.S. citizens will be admitted to the United States for treatment of Ebola Virus Disease.”

The document goes on to discuss – and advocate for -- devising such a plan.

Explaining that recommendation, the memo says the U.S., for instance, has an “obligation” to help non-citizen employees of U.S. agencies and U.S.-based private firms.

It says the U.S. “needs to show leadership and act as we are asking others to act by admitting certain non-citizens into the country for medical treatment for Ebola Virus Disease (EVD) during the Ebola crisis.”

AND NOW, LET US PONDER JOHN HOLDREN AND THE FACT THAT WE HAVE A PRESIDENT WHO WOULD APPOINT SUCH HUMAN SCUM TO BE HIS SENIOR ADVISOR ON HEALTH AND TECHNOLOGY ISSUES.
Comment at Free Republic by Cincinatus' Wife
John P. Holdren, Science and Technology Adviser for Barack Obama 2008 - Present.

"....Holdren gave a clear indication of his philosophical views in the 1977 book Ecoscience, which he co-authored with Paul and Anne Ehrlich. In its pages, the authors noted, "The neo-Malthusiasn view proposes...population limitation and redistribution of wealth." They concluded, "On these points, we find ourselves firmly in the neo-Malthusian camp."

Economist Thomas Malthus is one of the most literally anti-human theorists in human history. He viewed overpopulation as the fount of all woe, but one which could be staunched with enough blood.

In "An Essay on the Principle of Population" Malthus wrote, "All the children who are born, beyond what would be required to keep up the population to a desired level, must necessarily perish, unless room be made for them by the death of grown persons...if we dread the too frequent visitation of the horrid form of famine, we should sedulously encourage the other forms of destruction, which we compel nature to use...and court the return of the plague." Like their intellectual forebear, Holdren and the Ehrlichs proposed their own acceptable sacrifice to the environment....."

Pasto,
For the past few weeks, I've been saying, "Why is Obama taking such a position on Ebola?"

This information you posted seems to answer my question.

Kaci, that special snowflake of a 'nurse' in Maine just happened to be trained as an “intelligence officer” under a two-year CDC program modeled after the U.S. military.
via: DailyCaller
"Hickox was a class of 2012 member of the CDC's two-year EIS officer training program, according to the official program for CDC's 2014 EIS Conference (p.98), which was held from April 28 to May 1, 2014. Hickox was featured in a photograph in the program.
Hickox was listed as an "EIS officer" for the CDC in program materials for a DC course she taught in July 2014. She was specifically listed as an active "EIS officer" as recently as July 18, 2014, according to CDC documents.

AOW, I would like to think this post DOES NOT answer the question, but I'm afraid it does.

As I said in my comment yesterday, I must be paranoid to think that this nurse is acting on government instructions. By the same token you surely do not want to go back to the bad old days of primitive superstition as in the last plague to hit London in 1665. At that time at any house where someone died of the plague they locked the doors, put a watchman in front and did not allow anyone to leave for 40 days. They even put their navy on the river to stop any boats from foreign infected ports to land. Despite that, the death toll was still about 15%, better than the 50% of the 14th century but a heavy toll nevertheless.