Burqa Poll: 38.14% of Muslims want to deny women the freedom to chose their own clothing 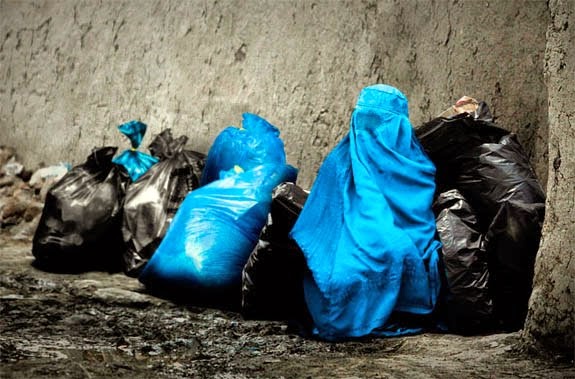 
38.14% (Mean) average would translate to 793,312,000 Muslims. The Muslim population worldwide in 2014 was estimated to be 2.08 billion people. The demand for women to wear a full covered cloak is not a religious obligation within Islam, but is a demand originating by extremist groups.

Full body and face coverage with a Burka or Niqab is a dress created to warn women that if they do not hide, they face rape and abuse. The reasoning being that they invite and deserve these crimes by their own volition, unless they cover up. 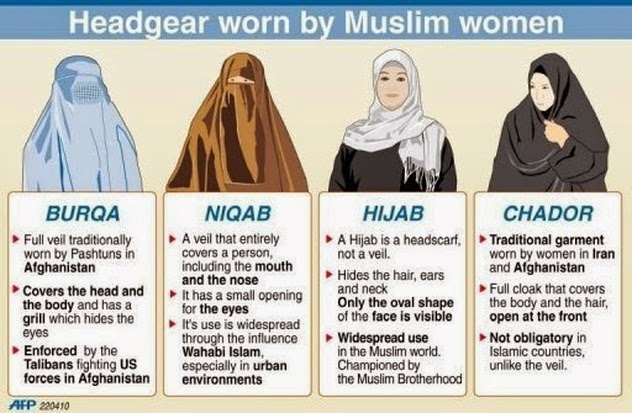 The style #1 is en vogue in Afghanistan; #2 is popular among both conservatives and fundamentalists in Saudi Arabia and other Persian Gulf Arab countries; #3 is the style vigorously promoted by Shi’i fundamentalism and conservatives in Iran, Iraq, and Lebanon; #4 and #5 are considered most appropriate by modern Muslim women in Iran and Turkey; and #6 is preferred by secular women in the region.

Unsurprisingly, Saudi Arabia ranks highest for the most conservative clothing preference, as 63% of respondents pointed to the face-concealing niqab style as the most appropriate covering. On the other side of the spectrum, 32% of Turkish respondents and 49% of Lebanese respondents said that they considered an uncovered head to be most appropriate.

Overall, most people surveyed considered the conservative hijab look of woman #4 to be the most appropriate dress for public. The study also investigated responses to the question, “Should women be able to choose their own clothing?” 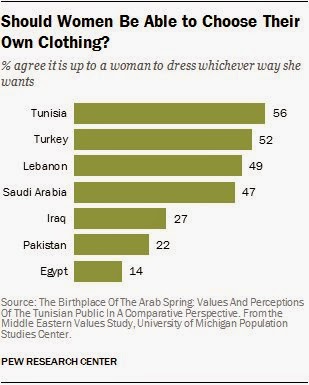 I have no idea. That number seems to change every time someone quotes it.

5 years ago it was 1.2 billion, then some mullah Iran said there were 1.6 billion idiots without any census or proof...now there's 2.08.

I know Muslims produce like cockroaches but they also die. Muslims create fake numbers because in some places they are taught that large number of followers is a sign of Islam being the true religion.

For all intents and purposes, Muslim population in reality actually still hovers around 1.2-1.3 billion.

Secondly, the demand for women to be fully covered is not only part of Islam but found within the Quran. These folks over at Muslim Statistics need to educate their ignorant asses.

And on that note, I would be willing to bet that this 38% figure includes women themselves and not just because they are afraid of getting raped but because Allah commands it. Everyone in the West feeling sorry for these women is wasting their time. They do it because Allah says so. And because of that, I don't care if they're wearing burqas or locked in dungeons. As long as they leave our women alone, I don't give a shit about them."

" The demand for women to wear a full covered cloak is not a religious obligation within Islam, but is a demand originating by extremist groups. "

It is a religious obligation being that its in the Quran.