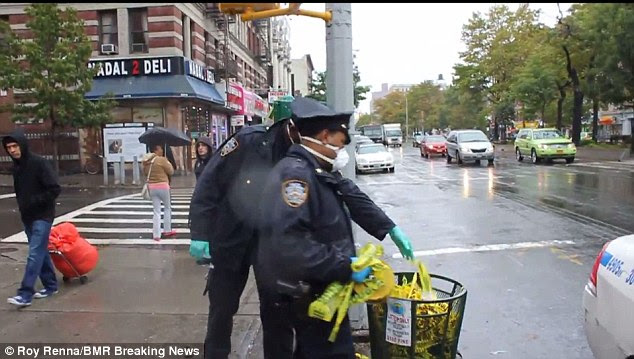 These are the cops leaving the NYC doc who tested POSITIVE for Ebola (after riding the subway ?? No seriously)
They are disposing their gloves into the trash.
Ebola virus LIVES and can be transmitted not only from blood and fecal matter, but MUCUS AND SALIVA.
Tulane research 2007
There is NO REASON to fear Ebola itself in a nation like the USA. There are abundant and manifest reasons to fear  ignorance, incompetence, and the unpreparedness which can itself CAUSE an outbreak.
These police officers are NOT at fault. The CDC, the NYC Health dept, and police admin who FAILED TO TRAIN AND ALERT these officers MONTHS AGO are at fault. The event in this picture is a PREDICTABLE EVENT
Disasters occur almost ALWAYS thru a series of events EACH of which is extremely unlikely individually, which occur serially.

Check out the Keystone Cops in this video, starting at about 2:38:

Twitchy: These photos of the NYPD cleaning up the Ebola crime scene might worry you

WaPo: The world is in denial about Ebola's true threat
The Ebola virus has multiplied in a medium of denial. There was the initial denial that a rural disease, causing isolated outbreaks that burned out quickly, could become a sustained, urban killer.

Still, the only known US Ebola cases can all be traced to people coming into the USA from known Ebola hot spots right?

So of course it makes no sense to restrict entry into the US by people coming in from those hot spots right?

Is the USA a nation or a prison camp?

I don't know if you mean restricting entry would make us a prison camp or not?

As you acknowledge, people are bringing Ebola into the U.S.

So far, two nurses have contracted Ebola from treating those who brought Ebola into the country.

This Doctor rode a subway and "spent time" with his girlfriend the day before he developed a 103 temperature and projectile vomiting.

Is the USA a nation, or is it a barf bag?

Twitchy: These photos of the NYPD cleaning up the Ebola crime scene might worry you

Are you kidding me?

Idiocracy on steroids has arrived.

WaPo: The world is in denial about Ebola's true threat October 23, 2014 7:55PM
The Ebola virus has multiplied in a medium of denial. There was the initial denial that a rural disease, causing isolated outbreaks that burned out quickly, could become a sustained, urban killer.

PLOS Currents: On the Quarantine Period for Ebola Virus
Oct. 14, 2014


Background:
21 days has been regarded as the appropriate quarantine period for holding individuals potentially exposed to Ebola Virus (EV) to reduce risk of contagion. There does not appear to be a systematic discussion of the basis for this period.

Methods:
The prior estimates for incubation time to EV were examined, along with data on the first 9 months of the current outbreak. These provided estimates of the distribution of incubation times.

Results:
A 21 day period for quarantine may result in the release of individuals with a 0.2 – 12% risk of release prior to full opportunity for the incubation to proceed. It is suggested that a detailed cost-benefit assessment, including considering full transmission risks, needs to occur in order to determine the appropriate quarantine period for potentially exposed individuals.

Politico: President Barack Obama on Friday greeted Nina Pham, the nurse who has recovered from Ebola, with a big embrace.