Looking at the picture below, it finally came to me what the problem is (over ebola anyway) 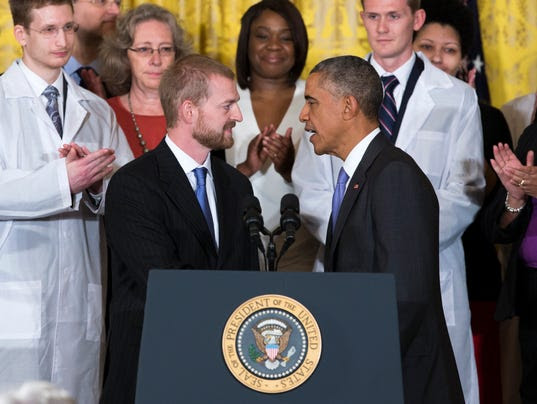 The people in the background are supposed to be all ebola workers who in some states would fall within the 21 day isolation period.
Never mind that I don’t understand why it is so onerous for those whose selflessness to others they never met is so large they risk their lives, but not so selfless they will not work with the CAUTION of those they live with .. in their home neighborhoods, what I don’t get is why the president does NOT COMPREHEND THAT:
But I do understand something.. the president, always and in the mirror the smartest person in the room, accepted what is clearly INCOMPLETE, if not doubted or

WRONG SCIENCE.
It IS possible (though UNLIKELY) to get ebola from someone sick on the bus near you. It IS possible (though UNLIKELY) to contact live ebola virus on a hard surface after more than a month of it being there.
Barack Obama is IMPRUDENT once his smartest man in the room brain accepts something.
Thus he insists the nation bet an outbreak against that which is possible but unlikely.
Gov’s. Brown, Lepage, Christie, and Cuomo (at the LEAST) don’t want to make that bet.
The worst president in the history of the USA is such as one of his main faults is THIS PATTERN. And he is in the midst of doubling down right now.


As for fellow Mainer Kaci Hickox, it is UNBELIEVABLE to me that her personality which drove her to such brave and selfless acts in far off Africa, in dangerous circumstances, does NOT EXTEND to her own neighbors, especially given the incomplete, doubtful or WRONG science - regardless of the legal situation

A Texas nurse has just returned from the hot zone and agreed to quarantine herself. Our two Texas who contracted Ebola behaved in responsible manner.

The Maine nurse? She can't give 21 days of her life for her nation?

As a former LCDR in the USNR I have many, many friends who have endured ten month stints away from family, and they have housed within in the very same conditions which Ms. Hickox claimed "abusive". Nobody likes a whiner. Really.

Ms. Hickox, is a bit too high and mighty in the estimation of her own importance. But then again, she has been afforded a high-priced lawyer who attended an official White House state dinner.