Jeopardy answer is: Transiting to the nuclear missile launch point for training purposes

And the Jeopardy question?

Yesterday I literally said I could not imagine what the Russians IMAGINED they were doing.
We have one answer from NATO head of intelligence. 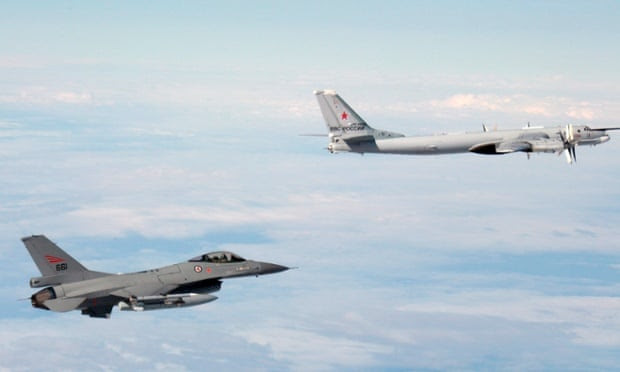 Nuclear-capable Russian bombers are flying over the North Sea and the Atlantic. And U.S. Air Force officers are very concerned at what could be a rehearsal of a deadly mission.


Russian bombers may be flying nuclear strike drills over the Atlantic Ocean and North Sea, current and former U.S. Air Force officers believe. At the very least, these officers tell The Daily Beast, the Russian Air Force is aggressively probing what NATO calls European airspace in an effort to gauge the reaction times of the western alliance’s defenses.


The giant, propeller-driven Tu-95 is a launch platform for the 1,600 nautical mile range Raduga Kh-55 nuclear-tipped cruise missile. The weapon carries a 200-kiloton nuclear warhead; by comparison, the bomb that destroyed Nagasaki was a mere 21 kilotons. Some active-duty and retired U.S. Air Force officials told The Daily Beast that the Tu-95s might have been flying to certain predetermined launch points for their nuclear missiles.


“That could certainly be the case,” said retired Air Force Lt. Gen. David Deptula, the service’s influential former intelligence chief. “It is not farfetched that at some point within the next two years [Russian President Vladimir] Putin makes a more aggressive move in Eastern Europe and uses a nuclear threat to deter a NATO response.”
Of course, every nuclear capable air force runs exercises to practice its so-called “strategic deterrence.” It’s the pace and scale of these current flights that have military observers concerned.


“Our bomber crews regularly fly training sorties for their full range of potential missions, including strategic deterrence practice missions,” Mark Gunzinger, a former B-52 pilot and current air power analyst the Center for Strategic and Budgetary Assessments, said. “[The Russian Air Force] has never stopped flying training sorties, but it’s apparent that the scope of this one is catching people’s attention.”


Asked if at least some of these flights were nuclear drills, Gunzinger responded, “that is probably the case.”


Meanwhile, Obama is unilaterally dismantling the US nuclear arsenal.

I agree, that at this time he's not fully ready to start a first strike, but it won't deter him to launch a first strike if he's pushed far enough.