This is ISIS Civilization at it's Zenith.

It will be nothing but downward from here. 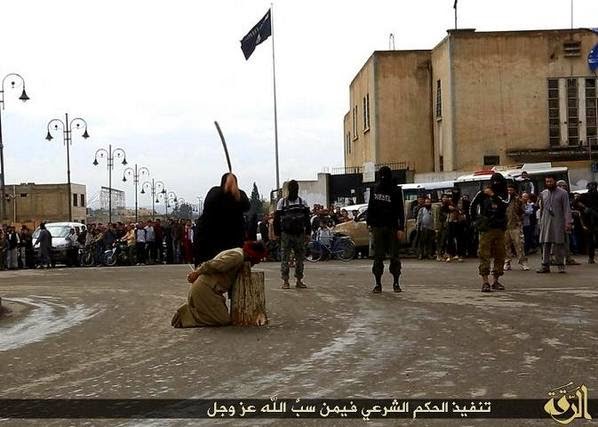 Praise be to Allah who Normans slaves Mujahideen in the land, and enabled them to extend prescribed in Astkhalafhm it, have been set up courts for this purpose, and restored the rights of its people, and set up the border, and has implemented the provisions of Almighty God to mankind, and was thus rampant in the tyrants time the issue of insulting God Almighty , people have dared to insult the Lord of Glory in the markets and streets and houses, what was the Diwan of the judiciary and the injustices in the Islamic state, however, was quick in the application of the ruling on that issue, and this is based on forensic evidence from the Quran and Sunnah according to the judgment scientists' understanding, issuing Court ruling to strike the head of anyone who dares to Lord of Glory and insults "hitting his head with the sword in front of a range of Muslims,"

​​and after the issuance of this rule and published and circulated to residents in the territory of the Islamic state, the Islamic court seized several cases of insulting God Almighty, and then brought in and they recognized themselves Bsabhm Lord of the Worlds, the judge's ruling to strike their heads in front of a gathering of Muslims, Dish rule in yards mandate of the General tenderness, to serve as a deterrent to those who dare to Lord of the earth and the heavens, and thanks to God Almighty, the people today feel a capacity to live and secure, and that the blessing of the application of Islamic law.

Hmmmm.....But, but Muslims Say Beheadings Are An Insult To Islam

Another attack in NYC (flushing/queens) = unknown if sjs

The man was treated and released, only to return a short while later,when he menaced staff with a utility knife and demanded syringes, O’Neill said.

Cops were called and a sergeant walked up to the suspect, identified as Joseph Priolo, officials said.

Priolo turned away from the sergeant before being confronted by two uniformed officers, who were coming down a hill toward him, the patrol chief added.

“He brandished the utility knife, and one of the two officers fired twice,” O’Neill explained.

Modal Trigger Cops found this utility knife at the scene of the shooting.Photo: G.N. Miller

Priolo was given CPR and returned to Booth Memorial Hospital, where he was pronounced dead, according to the NYPD.

He has had several prior run-ins with cops, sources said.