HANDS UP, DON'T TELL THE TRUTH: CNN Discovers Mike Brown Autopsy Expert Is Not a Professor or a Doctor 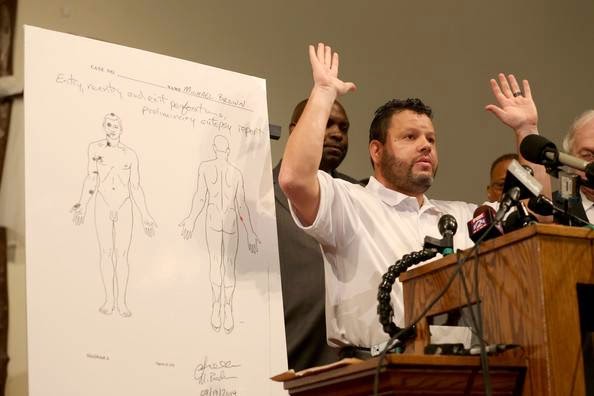 Shawn Parcells - the forensic pathologist hired my the lawyers representing the riot-inciting Brown family in Ferguson - does not have a medical degree, or any specific certification in forensic pathology. And yet, CNN has been quoting this man as an expert for months on end, given credence to the idea that Darren Wilson shot Michael Brown while he was in a hands up position.

This has been freely available information for months now. Anyone not obsessed with racial hate-mongeriing has been aware of this information.

And yet CNN never seemed to have learned the truth.

Perhaps CNN avoided the truth all this time, because racial hate-mongering is good for ratings.

This week CNN finally discovered that Parcells is not a professor, he’s not a doctor, and he’s not qualified to work unassisted on autopsies either.

Parcells doesn’t claim to have any specific license or certification to do the work he does. He knows how to do autopsies from “on-the-job training,” watching pathologists and assisting them at various morgues, he said. Sometimes he’s been paid for this work and sometimes he wasn’t, he added.
“To take out organs and to cut open a body, you don’t need to be a pathologist,” he said. “Come to an autopsy. I think when you see what I do, you’ll realize that I’m not just making this stuff up out of blue, thin air.”
He certainly sounded knowledgeable and authoritative on August 18 when he presented the findings of the Michael Brown autopsy to a nationally televised news conference.
Baden, who conducted the autopsy, spoke first, and then introduced Parcells, saying he “has been instrumental in the autopsy evaluation.”
“First of all, I’m Professor Shawn Parcells,” Parcells said as he stood to address the reporters.
On his LinkedIn page and to CNN, Parcells said he’s an adjunct professor at Washburn University in Topeka, Kansas — but a spokeswoman for the university told CNN that’s not true.
“(Parcells) is not now and has never been a member of the Washburn University faculty,” university spokeswoman Michaela Saunders wrote in an email to CNN, adding that at one point, Parcells spoke without receiving pay to two groups of nursing students about the role of a pathologist’s assistant and gave a PowerPoint presentation and answered students’ questions.

So, a destructive fraud was perpetrated?

Also not surprised that what passes for a news media in this couldn't be bothered to do a basic backgrounder on this guy. Too busy pushing the narrative.

I think it is hilarious that the dear "professor" managed to provide a PowerPoint for nursing students. It is just basic biology, one of the required courses. I still remember dissecting a fetal pig and placing little pins with red or blue tops to denote veins or arteries. That did not qualify me as a pathologist, a full M.D. with a specialized track of learning.