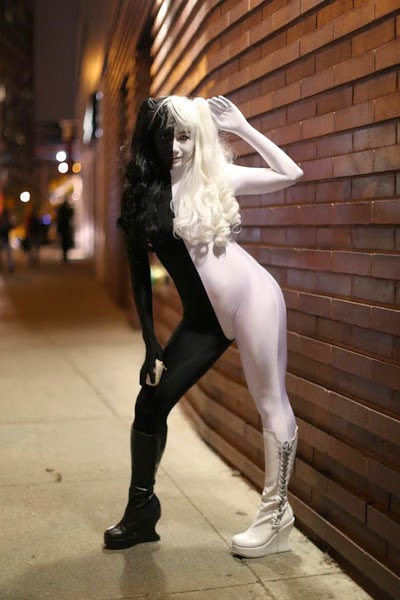 A suggestion that white and non-black protesters limit their visibility and “stand behind black folks” at protests Tuesday in Ottawa and Toronto against the fatal shooting of a black teen in Ferguson, Mo., has sparked a heated debate on social media.

Bilan Arte, one of the Ottawa event organizers, says on the vigil’s Facebook page that “white/non black allies” should “refrain from taking up space” and “never be the centre of anything.”

The same message appeared verbatim on the Facebook page for the Toronto rally, asking whites and non-blacks to not speak to the media, saying “black voices are crucial to this.”

Arte’s post prompted more than 100 comments, with one man asking “is this an anti-racist rally or a pro-segregation one?”

Arte, deputy chairwoman with the Canadian Federation of Students, says on her own Facebook page that she’s received upwards of 50 messages from “righteous upset white people” taking issue with the post.Read the full story here.
Posted by Pastorius at 3:10:00 am

Breitbart: CONFIRMED: VALERIE JARRETT KEEPING IN TOUCH WITH GOV. NIXON DURING FERGUSON FIASCO
Quote: “As you know, we've been working closely with them for the past few months leading up to this point to make sure that responses to this moment would be appropriate and constructive,” Deputy Press Secretary Schultz said.


Damn...that's one hell of an admission to this administration's complicity in fomenting racial discord on a national scale!

BTW, Schultz, the same fellow who was bullying Sharyl Atkisson over her investigation of the Fast and Furious Operation.