Report: One In Three Black Inmates Convert To Islam While In Prison 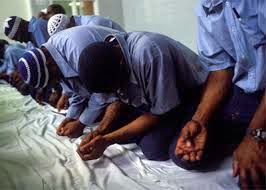 
Back in 2006, then FBI director Robert Mueller prophetically described the radical Islamist conversion machine operating throughout U.S. prisons, to a Senate committee. He said that prisons were a “fertile ground” for Islamic extremists, and that they targeted inmates for introduction to the militant Wahhabi and Salafist strains of Islam.

The recent so-called “lone wolf” terrorist attacks in Oklahoma City, New York, and just over our northern border in the Canadian capital of Ottawa, may be the product of such radicalization.

Last month NYPD officer Kenneth Healey, 25, was axed to death with a hatchet to the side of the head. He was not attacked by a “lone wolf,” but by ex-con Zale Thompson. New York City Police Commissioner William Bratton has called it a terrorist attack, and the NYPD might want to look at Thompson’s record in California where he did two brief terms in California prisons.

The statistics are staggering, and woefully out of date. One out of three African-American inmates in U.S. prisons convert to Islam while incarcerated. This statistic is no longer limited to African-Americans in prison.

This is more than 18 times the national representation of Muslims in America, reported to be 0.8 percent. Prisons are churning out converts to Islam who are taught they are righteously entitled to control the religion, speech, and dress of family, co-workers and strangers.


“the metropolitan political left spent the previous 30 years telling white working-class people how stupid and backward they were for being sexist, homophobic and insular now unabashedly demonstrate a chronic crush on a belief which specialises being sexist, homophobic and insular. Men yielding political influence who believe that once you’ve ticked the Brotherhood of Man box on your spiritual census, this gives you the right to be as big a bastard as you like towards women. Yes, some of their collective cultural cringe is stupid guilt about being white and western — the sort of poltroon who, if they happened across their dear grey-haired old mother being ‘roasted’ by al-Qa’eda at one end and Isis at the other, would ask ‘What did she do to make these innocent young lads act in such an uncharacteristic fashion?’ — but a lot of it, I believe, is sheer sexual wish fulfilment.

I just saw this article, but regardless of what I may know about Scott Walker, which nearly zero, having Grover Norquist as an endorser, it´s enough for me. Stay clear from Governor Walker.

Should the 2016 be between Hillary (who I despise) and Walker, I´d vote for Hillary, because Walker is undoubtedly under the thumb and petro dollars behind good old Grover.