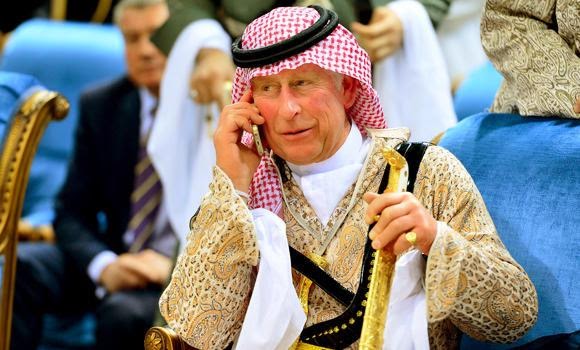 
What a great idea. Here are some readings that would go over great at Charles’ coronation, and show who is the boss in the Brave New Britain:
Christians have forgotten part of the divine revelations they received: “From those, too, who call themselves Christians, We did take a covenant, but they forgot a good part of the message that was sent them: so we estranged them, with enmity and hatred between the one and the other, to the day of judgment. And soon will Allah show them what it is they have done.” — Qur’an 5:14
Jesus is not the Son of God: “O People of the Scripture! Do not exaggerate in your religion nor utter aught concerning Allah save the truth. The Messiah, Jesus son of Mary, was only a messenger of Allah, and His word which He conveyed unto Mary, and a spirit from Him. So believe in Allah and His messengers, and say not “Three” – Cease! (it is) better for you! – Allah is only One Allah. Far is it removed from His Transcendent Majesty that He should have a son. His is all that is in the heavens and all that is in the earth. And Allah is sufficient as Defender.” — Qur’an 4:171
“It is not befitting to (the majesty of) Allah that He should beget a son. Glory be to Him! when He determines a matter, He only says to it, ‘Be,’ and it is.” — Qur’an 19:35
Those who believe that Jesus is God’s Son are accursed: “The Jews call ‘Uzair a son of Allah, and the Christians call Christ the son of Allah. That is a saying from their mouth; (in this) they but imitate what the unbelievers of old used to say. Allah’s curse be on them: how they are deluded away from the Truth! ” — Qur’an 9:30
Jesus was not crucified: “And because of their saying: We slew the Messiah, Jesus son of Mary, Allah’s messenger – they slew him not nor crucified him, but it appeared so unto them; and lo! those who disagree concerning it are in doubt thereof; they have no knowledge thereof save pursuit of a conjecture; they slew him not for certain.” — Qur’an 4:157
“Koran should be read at Prince Charles’ coronation says top bishop: Critics attack proposal and accuse,” by Steve Doughty, Daily Mail, November 28, 2014 (thanks to Pamela Geller):

Prince Charles’s coronation service should be opened with a reading from the Koran, a senior Church of England bishop said yesterday.
The gesture would be a ‘creative act of accommodation’ to make Muslims feel ‘embraced’ by the nation, Lord Harries of Pentregarth said.
But critics attacked the idea, accusing the Church of ‘losing confidence’ in its own institutions and traditions.
Lord Harries, a former Bishop of Oxford and a leading CofE liberal thinker, said he was sure Charles’s coronation would give scope to leaders of non-Christian religions to give their blessing to the new King.
The former Bishop of Oxford, who continues to serve as an assistant bishop in the diocese of Southwark, made the suggestion about the Koran during a House of Lords debate. He told peers the Church of England should take the lead in ‘exercising its historic position in a hospitable way’.
He said that at a civic service in Bristol Cathedral last year authorities had agreed to a reading of the opening passage of the Koran before the beginning of the Christian ritual. He said: ‘It was a brilliant creative act of accommodation that made the Muslim high sheriff feel, as she said, warmly embraced but did not alienate the core congregation.
‘That principle of hospitality can and should be reflected in many public ceremonies, including the next coronation service.’
Lord Harries’ suggestion comes more than 20 years after the Prince first said he would prefer to be seen as ‘Defender of Faith’ rather than be known by the monarch’s title of ‘Defender of the Faith’.
Charles said in 1994 he ‘always felt the Catholic subjects of the sovereign are equally as important as the Anglican ones, as the Protestant ones’.
‘Likewise, I think that Islamic subjects, or the Hindu subjects, or the Zoroastrian subjects of the sovereign, are of equal and vital importance.’ In 2006 the Prince made known that he wanted a multifaith coronation that would be more ‘focused and telecentric’ than his mother’s in 1953.
However traditionalist Christians condemned Lord Harries’s idea.
Simon Calvert of the Christian Institute think-tank said: ‘Most people will be amazed at the idea that a Christian leader would consider the use of the Koran at a Christian service in a Christian abbey.
People are just so disappointed when senior Church of England figures lose confidence in the claims of the Christian faith.’
Andrea Minichiello Williams, a member of the CofE’s parliament, the General Synod, and head of the Christian Concern pressure group, said: ‘At a time when we are looking at what British values mean, we cannot have values in a vacuum. British values stem from our Christian heritage.
‘We cannot pretend all religions are the same, or have the same benefits and outcomes for the nation.’…