The end of American credibility

As many of us know, or should know, nuclear talks have been ongoing now between the west and Iran designed to ensure the racist freak show running that poor nation does not get any nuclear weapons, and try to carry out what every leader since 1979 has promised to do, OR hand off to a deniable intermediary.
When these talks began many months ago a deadline of today was set as some sanctions were lifted in a TEMPORARY measure to ‘encourage’ Iran in ‘good behavior’ and also as a means of ensuring that when the talks ended they did so with a verifiable treaty, and if not, sanctions go back in place.
Right now the news media is reporting BOTH the failure of the talks with today’s deadline, and an extension. The truth is that, since no sanctions will be reimposed, as Iran ALWAYS WAS CERTAIN we now have a situation whereby no agreement exists for Iran to violate, no talks with a deadline or limit exist, and Iran faces no penalty for stiff arming the west.
This outcome causes one to now consider that Obama’s plan may encompass ‘extensions’ through Jan 2017 and the next president while ‘talks’ continue (until Iran simply gives up the charade, walks away and signs all those agreement$ other western nations like Germany are drooling to sign).
Thus Obama avoids a DREADFUL showdown with R’s in the Senate over a treaty they will NEVER pass (because any treaty Iran WOULD sign would be so disadvantageous to the west, we could not), and this all becomes another tool of domestic politics rather than a tool to improve the security of the American people. 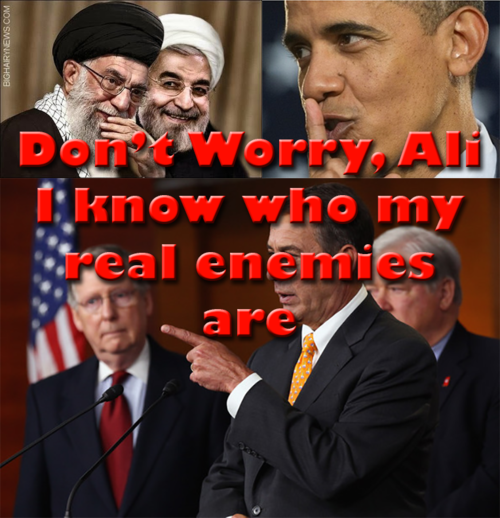 The pity is, that in the end, Israel will act and this failure to either be SERIOUS by the USA or be CREDIBLE in our statements that Iran is NOT ACCEPTABLE as a nuclear power we guarantee a war which will be exceedingly unpleasant FOR THE WORLD.
We all expect to have this come about via a fleet of F-15’s in the sky over Arak, and Fordo etc, but I really don’t believe it’s going to be that way. It’s going to be FAR MORE decisive, and far more consequential, and  a true shock.
And we will be as sickened by our own failure to RECOGNIZE this stupidity today as we now are via the words of one J Gruber over Obamacare.
We VOTED for this end.
Just remember
Posted by Epaminondas at 1:55:00 pm