Sharpton et al “expressed fear that the backlash over the bloodshed could derail the protest movement that has grown out of the deaths of Michael Brown and Eric Garner.”

The backlash HAS ALREADY OCCURRED and it is against the police

But nice try at extension of victimhood
False start. Five yard penalty from the line of Scrimmage, THIRD DOWN AND 20.

In September 1957 it took the 101st Airborne, a Supreme Court Ruling, an army of lawyers, and US Marshalls to push aside the Governor of Arkansas, an his national guard to get 9 little children into a Little Rock school. 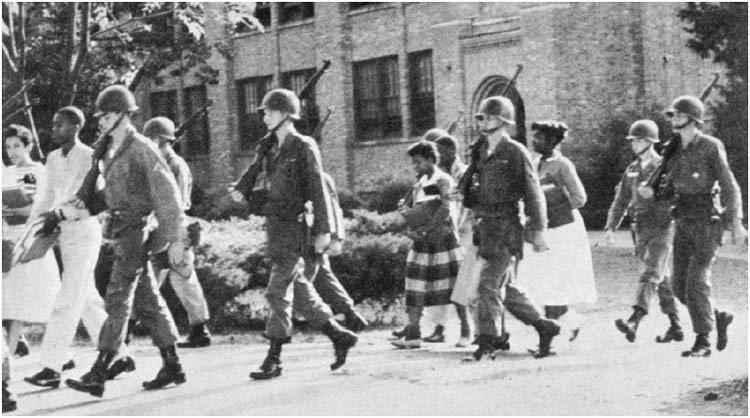 Now, not only do we NOT EVEN NOTICE mixed race couples (or their children) in any combination, we have had non white cabinet members, senators, SCORES of congressmen, and thousands of sheriffs, generals, mayors, governors YADDA YADDA YADDA.

Oh, and a FRICKIN’ PRESIDENT.

From Selma in 1965 to this INCITED, backlash execution?

49 years . 2 Generations.
All after, of course 360,000 Union men died killing slavery in this land over 4 years, and we had over a MILLION casualties.

The KKK went from a lynching and church bombing organization that had spread to the northeastern states, to a joke of toothless grade school dropouts and militant freaks allied with only the lowest scum of American existence.
That’s what it took for integration, and the GUARANTEE of equal opportunity to mutate into a cancer. That’s what it took for the righteous to fall into hideous disgrace, and a great cause to be pissed on. BY SO CALLED LEADERS of that cause.
Why then, is Mr Sharpton et al, afraid of a BACKLASH?
Because he is afraid righteous and thinking individuals will see him and his so called ‘action network’ for the carnival freak show barker he is, and see his victims as the sad dupes they are.
Worse still, might be the CORRECT identification of once admirable and great groups such as the NAACP and the SPLC as having fallen from moral conscience prodding organizations of great timeless import to cheap political hacks trading sound bytes for support.
Is THAT a backlash, because I thought that before the cretin Zimmerman shot Trayvon Martin and the president rather than liken HIS racial background to Mr Zimmerman’s instead DIVIDED US with his statement about his make believe ‘son’? An example BTW, followed PRECISELY this month by the Mayor of NYC.
This is all a separate issue from the events in Ferguson and/or Staten Island (where a black sergeant was present ON SCENE, and presumably supervising).
Ferguson still has some questions of fact based on Smoking Gun.
And part of that story is the lack of voting responsibility by that town’s citizens. HOW IT IS.
Those who have seen the Garner video have a hard time understanding why no criminal charge at all, OF SOME KIND was levied.
Certainly in the latter case, civil responsibilities await.
Either way, if the SYSTEM is flawed, get out and vote to CHANGE THE DAMNED SYSTEM. Propose changes and get it voted on. And be prepared in the society to ACCEPT the vote of your fellow Americans…especially since your RIGHTS cannot be abrogated.
If the citizens of Ferguson were active in that city’s politics, maybe there’s a black sheriff and a dead Michael Brown is a NON STORY?
But none of that has anything to do with the descent of of the cause of equal opportunity into that of partisan political advantage, and distortion of the true nature of civil rights.
It can NEVER be about more that guaranteeing equal opportunity.
PHYSICS
And if being reminded of that is a backlash, and fixing leadership responsibility for incitement is a backlash …
THEN BE AFRAID.
But make no mistake, too many, in this society where a mixed race couple (and I can’t STAND even drawing attention to the love formed between HUMANS this way) doesn’t draw much notice, getting SICK of this constant friction of grievance that SELF APPOINTED PROFESSIONAL GRIEVANCE OFFICERS nurse into a charlatan’s lifelong income and power, and FOR THAT PURPOSE only.

I believe that another police officer was recently murdered in Florida. Not sure if this murder was related to the #BlackLivesMatter demonstrations.

Last night, I watched something on Fox News. O'Reilly, maybe. Anyway, this angry black woman would not specifically say "how America can make this right." No answer, just boilerplate phrases that mean nothing. She was pathetic, but thought that she was saying something significant. She was not!

I fear that race relations here in the United States have been set back some 60 years. Latent racism exists -- I don't deny that -- but it's coming to the fore from several sides.

Is America going to descend into anarchy?

A nit pick perhaps but the SPLC has never been an admirable or a great group.