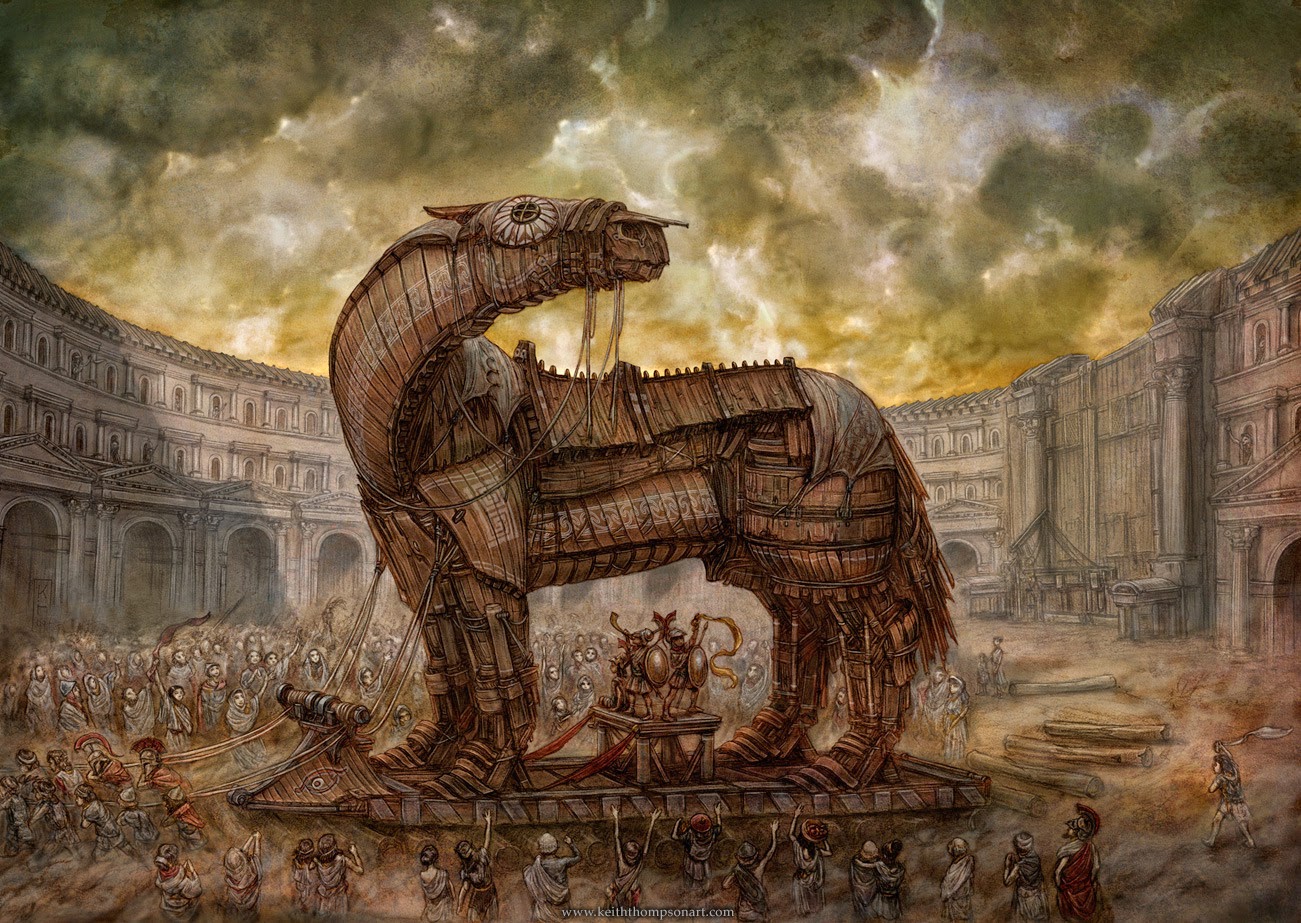 From the American Thinker:

Within the past few decades, mosques have increasingly dotted the landscapes of American and European cities and towns, with mega mosques often overshadowing adjacent, centuries-old churches in predominantly Christian regions.  Islamic schools or academies and a host of Muslim organizations have become omnipresent across the West.

Meanwhile, Americans and Europeans have made countless accommodations to Muslim demands. They have included footbaths; high-decibel, five-times-daily calls to prayer; segregated male-female gym and swimming pool hours; halal food; workplace dispensations for handling pork products and for female head and face coverings; and special, public prayer rooms. Also, shari'ah-compliant financial transactions, the expunging of offensive likenesses of Mohammed or imagined depictions of Arabic characters that connote "Allah," official swearings-in on Korans in place of customary Bibles, the neutralizing of official descriptive language about Islamists and the jihad, the revision of so-called offensive content in movies and television programs, the removal of representations of pigs from the public sphere, and many other acculturations to Muslim entreaties have all been made in the service of respecting Muslim religious beliefs and practices.

To those in Western democracies, these accommodating actions appear, on the surface, to be little more than harmless civil gestures, respecting the needs of a growing religion in their midst and welcoming a new addition to their proud, multicultural tradition.  Many Westerners pat themselves on the back for their liberal bent, their tolerance and their open-mindedness.

Little do they realize that this strategic pattern of demands is part of an insidious, 1,400-year-old proscription for Muslims that originates in the Koran and the Sunnah, the deeds of Mohammed.  It is the Hijra or doctrine of immigration. Modeled by Mohammed's migration from Mecca to Medina, this immigration is not to a romanticized melting pot wherein newcomers gratefully search for opportunities for a better life in liberty and freely offer their talents and loyalty to benefit their new homeland.  This is immigration for Islamic expansionism employing ethnic separatism to gain special status and privileges within the host country.  Hijra is immigration designed to subvert and subdue non-Muslim societies and pave the way for eventual, total Islamization.

In their compelling book, "Modern Day Trojan Horse:  The Islamic Doctrine of Immigration," authors Sam Solomon, a former professor of shari'ah law and convert to Christianity, and Elias Al Maqdisi, an expert on Islamic teachings, explain the migration of Muslims to the Dar-al-Harb, the "land of war," as a religious edict with a basis in Islamic doctrine.  They delineate the step-by-step process of this 1,400-year-old strategy of conquest. It is a transitional strategy which they characterize as the most important step in spreading Islam and preparing for jihad.  From their carefully delineated treatise on Hijra, it is clear that migration in concert with military conquest comprise the bookends of Islamic expansionism.

Solomon and Al Maqdisi review the phases of the Hijra and its juristic or legal basis in Islamic doctrine.  Under the cover of taquiya or deception, the step-by-step methodology of the migration process is designed to subdue, then, subjugate the host culture, culminating in implementation of shari'ah law.

The beginning phase of Islamization usually includes activities pivotal to building a physical presence. It consists of public calls to prayer; founding of schools, libraries and research centers; and the teaching of Arabic -- actions that appear to be reasonable and respectable infrastructure requirements necessary to support the presence of a faith.  At this point in the Hijra, it is permissible for Muslims to engage in haram, or forbidden actions, out of necessity to establish and empower the umma or Muslim community.  Koranic rules such as the prohibition against friendships with infidels are suspended while the objectives of future Islamization are systematically put into place. In its initial phase, the Hijra passes scrutiny by the West whose citizens erroneously view the migration as mainly economic -- a pilgrimage for a better life.

Solomon and Maqdisi examine the comprehensive strategy that begins with the establishment of the umma or Muslim community. The mosque becomes the locus of power, a strategic base and the center of all activities.  They explain how in this embryonic phase, a top priority is the scouting for new arrivals to expand and empower the existing Muslim community.  Muslim leaders offer solicitous assistance and helpful suggestions for schools, housing, mosque worship, halal markets and other services to ingratiate themselves with new arrivals and bring them into the local Muslim community.  Agents of local mosques, ever alert for new immigrants and potential converts, engage in subtle forms of indoctrination and police local Muslims.

This first step of establishing the mosque as the center of local Islamic life and activities is mistakenly viewed by non-Muslims as merely the benign construction of houses of worship.  Its true goal escapes notice, that of firmly establishing a purposeful non-integrated Muslim identity to advance the goal of Islamization.

Once the consolidation of the Muslim community occurs under the radar, the purposeful fight for special status and shari'ah follows. As dictated by the Koran and Sunnah, segregation from non-Muslims is a natural outcome of the advancement of the Hijra.

Visible changes begin to be apparent as the Muslim population achieves more of a critical mass.  Over time, the dress code, often beginning with a hijab in segregated enclaves and moving toward the complete covering of a neqab in the public sphere, separates Muslim women from men and from non-Muslim women.  Eventually, as the host population becomes familiarized with what they believe to be the requirements of religious piety, demands are made for segregation at public facilities, in the workplace and at schools and universities. Requests for halal food, shari'ah-compliant financial transactions and the addition of Muslim holidays to public calendars further elevate the Muslim community with a special status making them separate and distinct.

All demands are initially presented as benign attempts to accommodate the religious requirements of devout Muslims. Any actions to suppress them are decried as religious discrimination.  In the United States, requests for separate swimming and gym hours for Muslim men and women, demands for identification photos for licenses for women wearing hijabs and refusals to handle pork products or don immodest dress in the workplace have appeared.  At this point, representatives of the Muslim community are often working cooperatively with the host government to bring about change.  As Solomon and Maqdisi explain, the idea is to get the host society accustomed to Muslim buildings, customs, holidays, dress and food.  Newcomers are encouraged by Muslim leadership to become citizens, vote and run for political office to increase the umma's influence.

At the university level, students are indoctrinated to become advocates for Islam, engage in interfaith activities and da'wa or proselytization and train for jihad.  Non-Muslims professors are solicited through zakat or payments to present courses favorable to Islam and write and speak publicly to promote Islam. The bequeathal by Saudi Prince Al-waleed bin Talal of $20 million dollars for Islamic study centers at Harvard and Georgetown universities, respectively, was a gesture to insure the promulgation of positive research, publications and presentations toward Islam.

In "Modern Day Trojan Horse," Solomon and Maqdisi point out that as Muslims gain power and mass in the host country, consolidation of identity occurs, as well as strengthening of their infrastructure of mosques, schools, clubs, organizations and media.  The doctrine of taquiya is firmly in place as Muslims hide behind the dictates of their religious devotion and seek cultural changes in the land of the non-Muslim or kuffar.  At this more advanced stage, attempts are made to silence opponents and curry favor. The judicious use of zakat elicits favorable views of Muslims and Islam from politicians, representatives from the media and other organizations.  For example, within the last couple of years in the United States, the words, "jihad" and "Islamofascism," have been expunged from the lexicon of government officials and the words, "Islamic" and "terrorism," are rarely paired.  In Europe, which is further advanced in this process, a dangerous turn materialized with the murder of filmmaker ,Theo Van Gogh, who produced a film on the subjugation of women in Islam, and with death threats against Dutch parliamentarian Geert Wilder for his outspoken criticism of Islam.

As Islamization of the host culture proceeds apace, preparations begin for learning the skills necessary for jihad.  Young jihadists may travel to their countries of origin for further indoctrination and terrorist training.  This development has been noted within Somali Muslim communities in Minnesota and Tennessee. Young Muslims have disappeared to Somalia to rendezvous with Al Shabaab, a terrorist group linked to Al Qaeda.

As the resident Muslim community becomes more established and begins to wield considerable power in the political arena, pressure is brought to bear on politicians to permit shari'ah law courts in exchange for Muslim votes.  This is very much evident in Britain where parallel systems of legal jurisprudence currently coexist.  Muslim inhabitants of the host country are pressured to follow shari'ah law in lieu of the prevailing legal system.  Several recent legal decisions by non-Muslim judges in Europe have referenced shari'ah law as a standard for verdicts concerning Muslims.

As the intensity of the hijra advances, the appearance of open ghettos or Muslim-only regions occurs.  These are areas where non-Muslims are essentially prohibited and where, if they enter, they actually may be physically threatened.  Such no-go zones, where even non-Muslim community workers are unwelcome, exist throughout Europe today.  Remarkably, Muslim movements are never restricted; they venture freely anywhere in the host country.

As Solomon and Maqdisi point out, the Hijra is a comprehensive and direct political attempt to undermine the culture and values of the host country and replace them with Islam and shari'ah.  It is an insidious migration seeking transformation of the culture, behaviors, customs, rules and laws of a host society to spread Islam and establish an Islamic state.  The stages of the Hijra are very much evident in varying degrees in all Western societies today.  Ironically, our open democratic societies with constitutionally mandated freedoms of speech, religion and assembly have facilitated this march toward the very demise of our way of life.

"Modern Day Trojan Horse" should be required reading for all citizens of Western democracies who urgently need to understand the Hijra and the threat it represents.  The book sounds the alarm for the cautious evaluation of what may appear to be innocent religious practice in our midst but has sinister motives to transform our societies forever.

The future of such immigration can be seen in Sweden.