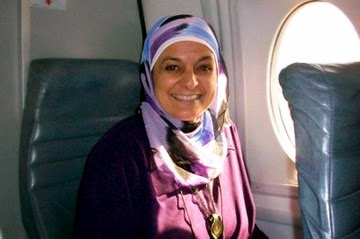 Probably Not The Right Muslima

US Airways has issued an apology after a flight attendant harassed the service dog a former Marine uses to help cope with post-traumatic stress disorder, Lansing State Journal reports.

On Dec. 7, the flight attendant yelled at Eric Calley mid-flight because his Doberman service dog, named Sun, placed her paws on an empty seat for a brief moment during a period of turbulence.

No one else appeared to have any problems with the event. A passenger sitting near Calley was also a veteran and guessed that Sun was there to help monitor Calley’s heart rate and calm him down.