1 Christian: 236 of 237 Syrian Refugees Admitted Since Paris Attacks Are Muslims 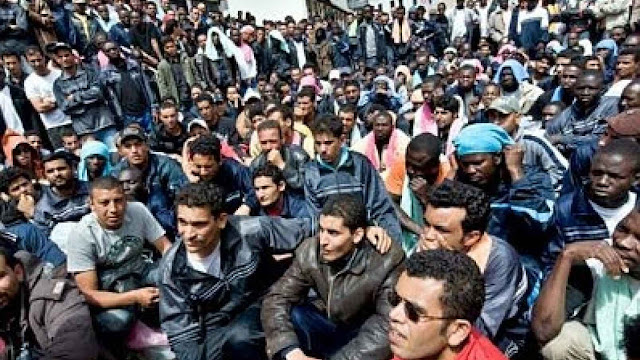 The Christian, a Greek Orthodox individual, is the sole non-Sunni Muslim admitted to the U.S. since the attack, which fueled concerns that the Islamic State of Iraq and Syria (ISIS/ISIL) may move terrorists into Western nations under the cover of refugee resettlement programs.

This story explains why it is so dangerous to allow Muslims to immigrate into the United States.

The reason only one Christian has arrived in the United States is because the Christians are afraid to travel with the Muslims.

In Europe there were multiple stories of Christians being thrown overboard from boats transporting refugees into Western nations:


Muslims who were among migrants trying to get from Libya to Italy in a boat this week threw 12 fellow passengers overboard -- killing them -- because the 12 were Christians, Italian police said Thursday.

Obviously this would deter Christians from attempting to leave Syria and other parts of the Muslim world.

The fact that of all the refugees from the Arab world, less than one-half of 1% are Christian tells us all we need to know about whether these Muslims are "moderate".

If they were, Christians would not be terrified.

We need to understand what these Arab Christians already know: These Muslims are human incendiary devices ready to flame into a murderous rage at any time, in any place
Posted by Pastorius at 3:47:00 pm

Note: remove all breakable items from vicinity while watching.

The fact that only one out of 265 refugees is a Christan is not only the fault of the U but also that on the UN refugee council which selects the refugees.