Corsicans Ransack Muslim Prayer Hall, Burn Copies of the Koran, In Retaliation For an Unprovoked Scuzlim Attack on Two Firefighters 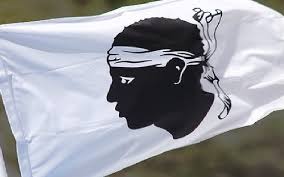 The Flag of Corsica


A crowd has vandalised a Muslim prayer hall in Corsica in apparent retaliation for an attack on firefighters in the French Mediterranean island.

Officials say a small group of protesters also tried to burn copies of the Koran in the capital, Ajaccio.

Overall, several hundred people gathered in the city to express support for two firefighters and a police officer injured on Thursday. T

he government condemned both acts, pledging to punish the perpetrators.

On Friday, the crowd gathered in front of the prefecture in Ajaccio to show their solidarity with the firefighters.

Some protesters later marched to the scene of the attack on Thursday night - a poor neighbourhood in the capital.

They chanted "Arabs get out!" and "This is our home!", AFP news agency reports.

The demonstrators then attacked the local Muslim prayer room, ransacking it and partially burning books - including copies of the Koran.

Scuzlims attacked firefighters? Why? Firefighters don't do anything to hurt Scuzlims. All they do is try to help people, including Scuzlims themselves, who are marginally people, or at the very least, appear to be of the same species as human beings.

But these Scuzlims did as Scuzlims do, and attacked Infidels?

Well, the story has been pretty much ignored by our anti-Western media. The only remnant of the story that I can find is this meager description from France 24:


Tensions had mounted in Ajaccio on Christmas Day after two firefighters and a police officer were wounded overnight in Jardins de L’Empereur, a low-income neighbourhood of the city when they were “ambushed” by “several hooded youths”, authorities said.

Sheesh. The Corscans certainly do seem to have a hair-trigger "Islamophobic" reflex. I mean, all that happened is some Scuzlims went full-tilt Jihad on some innocent firefighters, and a policeman got hurt too, and suddenly Corsicans are rising up in medieval furor, going all Crusader on that poor innocent Muslim Prayer Hall?

I mean, certainly, there are many Moderate Muslims who pray there, right? There's a difference between Scuzlims who would attack innocent firefighters for no reason, and the average every day nice Moderate Muslim who just wants to pray in their own Prayer Hall. Yes, Islam is a Religion of Peace and all that.

What the hell is wrong with the Corsicans?

Back in 2006, Gates of Vienna posted the following on the history of Corsica and it's flag:


The history behind this unusual symbol goes something like this: All throughout its history Corsica has been plagued by Muslim pirates, mainly the Moors. Hence the local saying: “Nothing good comes from the ocean”.

So in order to defend themselves they built watchtowers all along their island’s vast beaches (the concept was later copied by the Irish) and erected spikes with cut-off Moorish heads in order to deter the enemy.

Sometimes they paraded those spikes around the island, and the idea had the desired effect: Although surrounded by hostility on all sides — African Barbaristans to the South and Dhimmi-nations to the East (Italy), North (France) and West (El-Andalus) — Corsica is Muslim-free territory, even today (Please don’t tell the EU).

Walking around in Corsican cities is a pleasure: no “youths”, no women in black tents, no burnt-out cars, no vandalism, no screaming and ululating. Pork sausages, beer (“Pietra”) and good wines available everywhere. Music and dancing in the peaceful streets — the good life.

But everything comes to an end: I had to leave for home, eventually. When checking in at Bastia Airport I was taken out for “frisking”. Now — being as Danish as they come — my appearance isn’t exactly what’s called “of Middle Eastern complexion”, so I asked why.

The “flics” chuckled: “Well, you see, we have to do something, right? But we have no Muslims here!” And then they pointed to the overhead Corsican flag.

Well, apparently, SOMEONE let some Muslims into Corsica, and the Corsicans are, understandably, none too happy about that.

But perhaps the Corsicans should not go on a 21st century Crusade. Perhaps they should heed Angela Merkel's words, and prove their Christian values by laying their heads down on the guillotine so the "Moors" don't have to fight them, terrorize them until they are submitted?

What do you think?

I think Europeans should probably learn to be more like the Corsicans.


The under construction refugee hostel in Schwabisch Gmund, at the Baden-Wuerttemberg state was massively damaged after a suspected arson attack hit the facility on Thursday night.