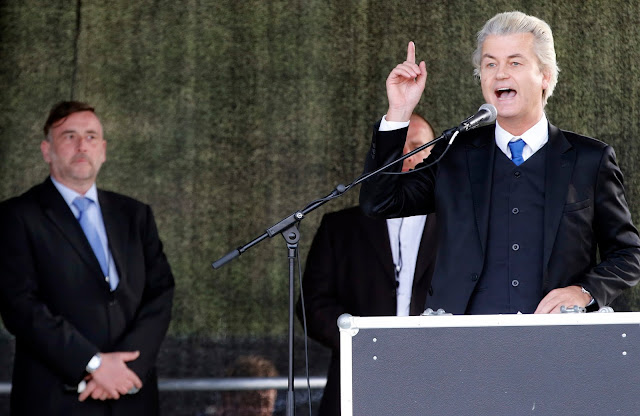 Dutch anti-Islam campaigner Geert Wilders on Monday refused to bow to pressure from other MPs to distance himself from the recent spell of anti-refugee violence.

‘Politicians and the press can drop dead,’ Wilders said on Twitter. ‘Distance yourself from your cowardice and betrayal of the Netherlands to Islam. Suckers.’

Wilders has previously issued statements rejecting the violence at protests about plans to locate refugee centres in several Dutch towns. However, he has not made any comment in the wake of the Geldermalsen riots last Wednesday in which a mob of between 70 and 80 people attempted to storm the town hall, and hurled bricks and fireworks at the building.


Here's a portion of the Declaration of Independence which I believe pertains to the situation Europeans find themselves in vis a vis their governments:


Prudence, indeed, will dictate that Governments long established should not be changed for light and transient causes; and accordingly all experience hath shewn, that mankind are more disposed to suffer, while evils are sufferable, than to right themselves by abolishing the forms to which they are accustomed.

But when a long train of abuses and usurpations, pursuing invariably the same Object evinces a design to reduce them under absolute Despotism, it is their right, it is their duty, to throw off such Government, and to provide new Guards for their future security.