How Many Muslims Serve in the American Military? HARDLY ANY 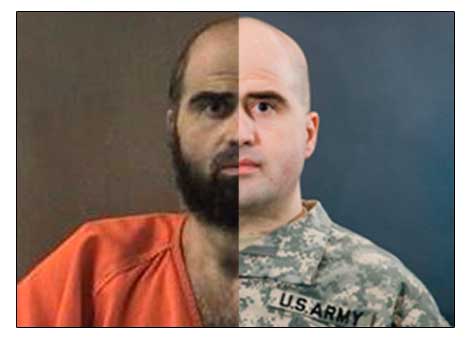 I was reading a comments thread, and some sock puppet made the following statement:


Alli, Washington DC, about 10 hours ago
I was deployed to Iraq and I am a marine. There were plenty of Muslims in my unit that were awesome Marines. A Christian, but if I chose to be a Muslim, that wouldn't make me any less a Marine.

There were PLENTY OF MUSLIMS IN YOUR UNIT?

Yeah, I fucking doubt it you fucking liar.

And, second, according to ABC News, in an article dated December 8, 2015, there are 2.2 million people in the American Military, and of those, less than 6000 are Muslim.


Muslims have played an essential part in guarding the homeland and fighting for its interests in war-torn countries the world over, fighting in all major U.S. wars, including the Civil War, World War I, World War II and the Vietnam War, according to military officials. More recently, Muslims have also served in the Gulf War, Iraq War and the war in Afghanistan.

Here's what the numbers tell us.

There are 5,896 self-identified Muslims currently serving in the military, according to the Department of Defense. This is out of a total of 1,313,940 active-duty and 826,106 guard and reserve members, respectively.

You can see from the first paragraph that the article is attempting to promote the idea that Muslims are patriotic.

Fine. Whatever. There are SIX THOUSAND AMERICAN MUSLIMS PATRIOTIC ENOUGH TO SERVE IN THE MILITARY.

Now, according to this article from PBS Frontline, there are 5 million to 12 million Muslims in America.

Let's split the difference and say there are 8.5 million Muslims in America.

According to this website, there are 325 million people in the United States.

This means Muslims comprise 2.6% of the total American population.

Let me know if my math is a little off. I don't think it is.

The point here is the number of Muslims serving in the American military is about 1/9th of what it should be when you take into account the amount of Muslims as a percentage of the total population.

By the way, if there are 250 people in a Military Unit, and Muslims make up less than 3/10ths of 1% of the total military, that would mean it would actually be unlikely there would even be a single Muslim in any given Military unit.

I'm ok if none of them are in the US Military - just saying.

Personally, I cannot name a single profession in which hiring a muslim does not present a danger to the general non-muslim public. Not one.

As for the military...recall the San Bernardino attack...

"The court papers filed on Thursday offered the first picture of how Mr. Farook, an American-born Muslim whose parents are from Pakistan, became radicalized — long before the rise of the Islamic State — and who his influences were.

The documents offer previously unreported details about his actions and attitudes, including his disdain for American Muslims who went into the military and killed other Muslims, ..."

In my 9 yrs and 3 mos as a Navy submariner, there was exactly 1 muslim that I worked with. 1.

CS,
There are probably more Mosques in military establishments than there are actual Muslims in the military.

Math is correct. .27% of Muslims make up the military.

Taken further, .07% of the Muslim population serves in the military.

So, in other words, 10 times as many Infidels serve per capita than do Muslims.

I wonder how Muslim apostates register when asked for religious affiliation: atheist, or Muslim? Any ideas?

It depends on what you mean by Apostate.

If you mean, lapsed Muslim then, imo, they will identify as Muslim.

But if you mean a person who made a conscious choice to leave Islam, then they would not identify as Muslim.

I understand. Thank you. And in my opinion the only "moderates" must be found in those two groups.