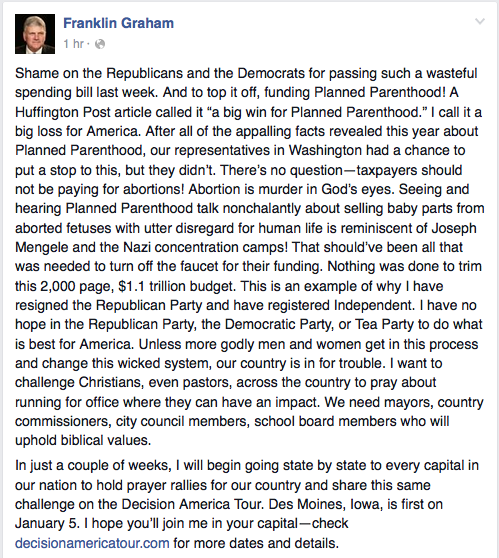 This is shaping up into a real movement.

Let's take a roll call. Who agrees with Graham?

I DO. (Look at our masthead statement.)

Absofrigginlutely. But I have retained my Republican Registration so I can still vote in the Pennsylvania primary and make sure I am heard AGAINST all the shits running and for the one or two guys who represent real change. Provided they haven't gone third party by then.

They want us to drop our registrations so they can get Jeb or someone else in with no opposition.

A little revolution now and then is a healthy thing.

BLOODMEAL FOR THE PLANT THAT'S PLOWED!

I've always been registered as an Independent.

Open primaries here in Virginia, and I sometimes vote in both primaries.

There is no party registration in South Carolina.

What I like about Graham's statement is his emphasis on local office. That is why I ALWAYS vote. If there is one deserving candidate running for any office, no matter how seemingly insignificant, then I owe to him/her to make the effort to cast a ballot.

The federal government is close to collapsing under the weight of its overreach. Who you have at the state and local level will make the difference when DC comes apart.

The prospect of Hillary as President doesn't bother me much. I'm way past voting for the R just because I don't want the D.