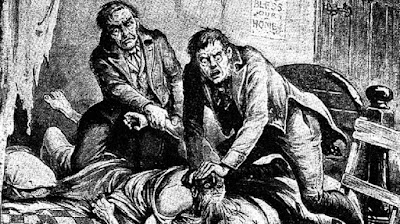 About the 19th Century ghouls Burke and Hare:


On Monday, November 3, 1828, Edinburgh awoke to the horrifying news that the most atrocious murders of the decade -- of the century -- had been committed in the West Port district of the Old Town. William Burke and William Hare, together with Helen M'Dougal and Margaret Hare, were accused of killing 16 people over the course of 12 months, in order to sell their cadavers as "subjects" for dissection.

Islamic State has sanctioned the harvesting of human organs in a previously undisclosed ruling by the group’s Islamic scholars, raising concerns that the violent extremist group may be trafficking in body parts.

The ruling, contained in a January 31, 2015 document reviewed by Reuters, says taking organs from a living captive to save a Muslim's life, even if it is fatal for the captive, is permissible....

And a smidgen of Jeffrey Dahmer, too:


The fatwa sanctioning organ harvesting justifies the practice in part by drawing an analogy to cannibalism in extreme circumstances, a practice it says earlier Islamic scholars had allowed. “A group of Islamic scholars have permitted, if necessary, one to kill the apostate in order to eat his flesh, which is part of benefiting from his body,” it says.

There is no negotiating with these evil savages. Extermination is the only answer.
Posted by Always On Watch at 1:54:00 pm

Note that Walid Shoebat had much of this information almost a year ago and posted thereon.

Almost a year later, the mainstream media "catches up."

The Brookings Institute is Qatar's pimp. So when Will McCants states this does not reflect modern Islamic practice he is wrong. It is happening. And it is happening because of allowances in Islam for mistreatment of POW's.

Forget about it all, until your own leg is blown off, or something else happens.