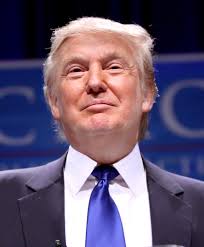 GOP Consultant Rick Wilson: Republicans Have to “Put a Bullet” in Trump’s Head

Kasich State Co-Chair Says You Have to Take Trump Out “With a Head Shot”
Posted by Pastorius at 1:48:00 pm

They're speaking euphamistically (I think) but still...

It's telling how worried the Dems are of Trump that they haven't condemned this the way they did Palin's targets.

He's threatening to take the children's toys and allowance away from them. That never plays well with OLD children who are used to a limitless checkbook.

He knows how to balance budgets, really does love peeps and supports less wastefull government spending. A dead head approach is what I would expect from a Jihad Perve,,,what up Bitch ?

Look, the argument has been made that such "euphemistic" talk is dangerous when it comes to politicians.

Republicans know what they are doing here.

They are horrible people.

If these guys are not fired and ostracized from the establishment, then that is just one more thing to show you how much contempt these GOP scum have for the people.

Tis why I said but still

No argument from me about them being horrible people

Sounds like you took it even more seriously than me.

I had not even given thought to the idea that it may have been a veiled threat.

You could very well be right about that.

And if that is true, that's fucking frightening.

When our gov't can let our finest die in the sand in Libya while they sit and listen to reports and refuse to even try and send help THEN come up with a bullshit story about a film then throw the film maker in jail for a year just for good measure...

There's nothing I don't think they'd stoop to

It's really time to throw off the bonds of our oppressors.

They need to go by whatever means are necessary.

One of you said the Dems are terrified about Trump. Don't you think the Reps are leading the stampede? Anyway, at least these two are Reps.

Euphemism? REally? I don't think that any of them would be willing to do it, but they would certainly like to see disappear.

There are laws against incitement to violence. They should apply in this case. May God forgive me, but I sure think Kasich would be willing to look the other way if that meant getting to the White House.