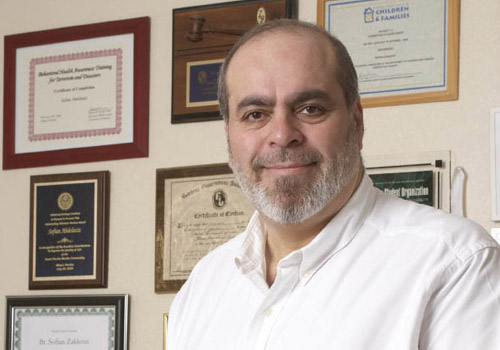 
When South Florida Muslim leader Sofian Zakkout wants people to believe he is a man of peace, he speaks or writes it in English. But when Zakkout wants to show his true colors and curse Jews or call for violence against people, he does so in Arabic.

This month, Zakkout’s real self came out once again, as he labeled Jews the “grandsons of monkeys and pigs,” while commemorating the 28th anniversary of Hamas. Sofian Abdelaziz Zakkout is the Director of the American Muslim Association of North America or AMANA.

While the organization may not be very well known outside of South Florida, AMANA is a major player for the Muslim community in the local area. In fact, Zakkout and his group have firm ties to two dozen mosques in the vicinity. Because of Zakkout’s position of leadership, when he makes a statement, it needs to be taken seriously.

In English, he will tell media outlets about how he is a man of peace, about how he was, for years, the co-chair of the Jewish Arab Dialogue Association (JADA).

In Arabic, he will make statements which are quite the opposite, supporting and inciting hatred and terror.

This month, Zakkout has been hard at work spreading the vilest of anti-Semitism in Arabic.

On December 13th, Zakkout posted a video on Facebook, featuring a Palestinian man with a microphone asking various Palestinian children what they believed the capital of Israel was.

The television channel that the video aired on, Jerusalem Satellite Channel, has been accused of being affiliated with Hamas.

Above the video, Zakkout placed a message for the Jewish people. He wrote in Arabic, “Jews, Muhammad’s army will return” and signed it “Sofian.”

On December 17th, Zakkout posted a photo of Israel Defense Forces (IDF) Chief of Staff Gadi Eizenkot, who is a decorated veteran of many different wars and battles fought by Israel the last three-plus decades.

Above the picture of Eizenkot, Zakkout grossly wrote in Arabic, “You’re a Jew, the grandson of a monkey and a pig.”

He signed it “Sofian.”

Well, he has a point. He is quoting from the Qu'ran and he is espousing Islamic eschatology.

He's just an imam being an imam, and hewing to the 'perfect, uncreated immutable' RACIST document of of a perfect and racist being?