French Intelligence Chief Says, Migrant Sex Attacks Will Spark Confrontation With Islam in Europe, So We Must Crack Down On "Right-Wing Hate Groups" 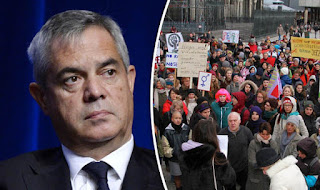 It's time for "right-wing hate groups" to pull all these government ministers out of their holes and expose them to daylight in a way that will make them never able to crawl back into their holes.

This Minister is advocating the end of Western Civilization (which is built on the Individual's right to think and speak for himself), and he's getting paid for it - by the French people!

Time for him, and everyone like him, to go.


FRANCE is on the verge of civil war that could be sparked by the mass sexual assault of women by migrants, according to the country's head of intelligence.

Patrick Calvar, chief of the Directorate General of Internal Security, told members of the French parliamentary commission: "We are on the brink of civil war."

He said that the situation in France is on such a knife edge that it could just take one more major Islamist terror attack to lead to a huge right-wing backlash.

Speaking to the leading French newspaper, Le Figaro, Mr Calvar said: "This confrontation I think it will take place.

"Even another one or two attacks and it will happen. It therefore behooves us to anticipate and block all these groups."

He said that he feared an inevitable confrontation between the far right and Muslims poses more of a threat than terrorism.

He said: "There will be a confrontation between the far right and the Muslim world."

At one point, Mr Calvar said: "Europe is in great danger, extremism is growing everywhere."

So what the Intel Chief is stating is that citizens who oppose violence against women must be stopped?

I was once called in for a late night case at work. The woman who was raped was punched so hard in the face that she later lost her eye. Her eye made contact with a heavy ring on his hand.

The perpetrator? From the Kingdom of Saudi Arabia. He quickly headed home.

Yes, I met him and spoke with him. Yes, he quickly disappeared. But somewhere in the world is that one-eyed woman.

Yep. I oppose violence against women.

It is right to do so.

Germany is an evil nation. I am not saying the people are evil. I am saying Germany as a nation is evil. It never stopped being evil.

There is really very little difference between Germany as a nation now and Germany as it was in the 30's. they have imported millions of Jew-Killers, and they are treating their citizens with an iron hand.

So, what's the difference?