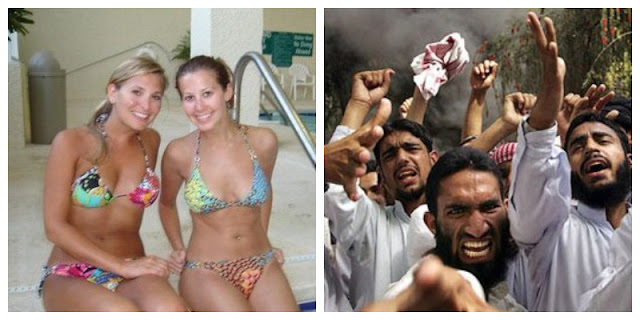 From The Daily Mail:

After harassing pool staff and customers, they targeted a water skiing park

One of the nudists, a local mother, said: 'We [German] women are all sluts and they would exterminate all of us.'

She added the aggression made her 'really afraid' and according to according to other witnesses the men referred to the bathers as 'infidels', reports Breitbart.

The Muslim gang were fluent in German, but also threatened people in Arabic.

A staff member at the pool, Lisa-Marie Theunissen, told Junge Freiheit she asked the men to be quiet after her customers had complained.

Well, thank God someone asked them to simmer down.

But, to be serious for a second, this is not merely bad behavior. This is the behavior of a group of people who are CONVINCED THEY HAVE A RIGHT TO TELL EUROPEANS WHAT TO DO.

If the Germans ever seriously decide they want to put a stop to the violence, the threats, and insults, they will first have to confront the question of exactly WHY the Muslims believe they have the right to tell others what to do.

The answer is because they don't do these things on their own authority. They do it on the authority of the Koran.
Posted by Pastorius at 1:19:00 pm

Below two percent Muslims are well-behaved citizens and cause little apparent trouble for the host society.
At two percent and three percent Muslims begin to proselytize from other ethnic minorities and disaffected groups with major recruiting from the jails and among street gangs.

From five percent on Muslims exercise an inordinate influence in proportion to their percentage of the population. They push for the introduction of halal (“clean” by Islamic standards) food, thereby securing food preparation jobs for Muslims. They increase pressure on supermarket chains to feature it on their shelves—along with threats for failure to comply (United States, Switzerland, Sweden). At this point, Muslims work to get the ruling government to allow them to rule themselves under Sharia, or Islamic law. (England, Netherlands, Philippines).

When Muslims reach 10 percent of the population, they increase lawlessness as a means of complaint about their conditions (Paris—car burning). Any non-Muslim action that offends Islam will result in uprisings and threats (Amsterdam, Denmark—Mohammed cartoons, murder of Theo van Gogh).

We're there in Germany.